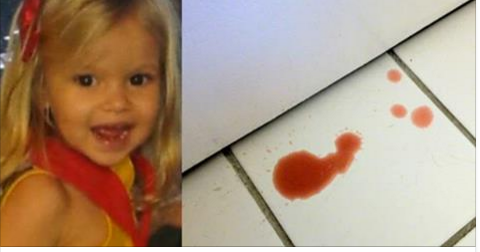 Every parent’s biggest fear is something bad happening to their child. Whether it’s getting hurt, or even more terrifying…killed. Unfortunately, this is exactly what parents from Oklahoma had to deal with who had their young child rushed to the hospital and then ended up dying shortly thereafter.
Their child turned blue unexpectedly and started coughing up and then throwing up blood. When the doctors studied the results of the x-ray, they found out the reason of the toddler’s death was all too common.

Two-year-old, Brianna Florer.
It started innocently enough: Two-year-old Brianna Florer came down with a mild fever. Her parents, Brian and Stephanie Florer, didn’t think it was anything unusual until their daughter started to turn blue and then vomited up blood. Immediately, they frantically dialed 911, and their daughter was rushed to Grove Hospital. Upon inspection of the x-ray results, doctors realized that the young girl had swallowed a button battery that was smaller than a dime.

A button battery.
Their daughter was then rushed to another hospital to have surgery done to remove the battery lodged inside her. “They operated on her for 2 hours, but they couldn’t stop the bleeding,” explained Brianna’s grandfather, Kent Vice, according to Daily Mail. “They believed the battery ate through to her carotid artery by way of her esophagus.” He continued, “’One minute she is perfect, and the next minute she is dead. We had no idea when she swallowed it.”
The worst thing about this story is that it happens all too frequently. These batteries are very common and found in many toys and gadgets, and items used around the house and in daily situations. Such as TV remotes, remote controlled cars / toys, and even musical birthday / greeting cards.
‘Pre-school age children are most at risk because these batteries are shiny and the same size as a Smartie. Children will think it’s a sweet, pop it in their mouth and swallow it,’ says Dr Kate Parkins, a pediatrician and consultant at Manchester University Hospitals Trust. Awareness MUST be increased about this topic, to avoid future fatalities. They are starting a campaign at the Department of Health, but the best way to increase awareness is by keeping this topic current amongst family and friends.
An electric current from the battery combines with saliva to produce sodium hydroxide — or caustic soda.This can burn through the oesophagus and surrounding blood vessels, causing potentially fatal damage that can happen within a couple of hours or sometimes less. ‘The child can bleed to death,’ explains Dr Parkins.
Doctors believe that Brianna had ingested the small button battery days before she died, however they are waiting the results of the autopsy before officially declaring her cause of death.

Brianna Florer
Her grandfather Vice has been speaking out about his granddaughter’s death, and wants it to serve as an eye-opener for parents everywhere and bring about change. “’I want to keep these things out of houses,” he confessed. “They are dangerous.”

Brianna Florer
According to Daily Mail, “There were 11,940 cases of children swallowing batteries from 2005 to 2014.”
Gemma Espejo-Degraph’s, 37 (pictured), 20 month old daughter, Amelie (pictured) was hospitalised in May 2014 after swallowing a lithium battery, the little girl was left with an 11cm scar in her oesophagus.

Horrific internal burns meant she was still at risk of a fatal bleed and would have to endure a series of gruelling operations to try to rectify the damage. Although Gemma’s daughter, Amelie, is now able to eat solid foods but the damage caused by the batteries may affect her for the rest of her life.

Ammar (right) and Fatima Noorwali’s (left) 13 month old Wsam Noorwali (pictured) died in August 2012 from internal bleeding after a battery in his stomach corroded an artery wall.
As a parent, it’s easy to imagine a toddler getting into something they aren’t supposed to and ingesting it. It only takes one second for a child to sneak something dangerous, regardless of how “baby-proofed” their home is made. Let this be an opportunity for anyone who has children in their lives to learn how important it is to keep an eye on children and to make sure anything dangerous is out of their reach. In a blink of an eye, our entire world could change, all because of something a child found on the floor.
‘When I lost my son I lost a part of myself,’ says Fatima. ‘I don’t want his death to be in vain. I want all parents to be aware of the dangers batteries can cause.’
(H/t: Daily Mail, Daily Mail 2  Image Source: NY Daily News Via: Damn)
If you like this blog don’t forget to share it.