Home » »Unlabelled » HISTORY HAS BEEN MADE! FEMALE GENITAL MUTILATION BANNED IN NIGERIA!

HISTORY HAS BEEN MADE! FEMALE GENITAL MUTILATION BANNED IN NIGERIA! 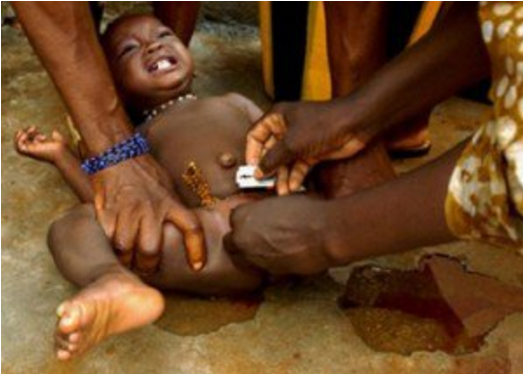 According to UNICEF:
“More than 130 million girls and women have experienced FGM/C in 29 countries in Africa and the Middle East where the practice is most common.”
With the help of community activism, campaigns and numbers of organizational efforts to end this practice, UNICEF reported that teenage girls were now one-third less likely to undergo FGM/C today than 30 years ago.
Now with the new law criminalizing this procedure, the hope is the ban will fully eliminate this practice and be strongly enforced to combat any existing societal pressures.
The World Health Organization cites immediate harmful effects of FCM/C that include hemorrhage (bleeding), bacterial infection, open sores, and long-term consequences that include infertility, childbirth complications and recurring bladder infections.
In another UNICEF report, communities who practice FGM often do so to reduce sexual desire in women and to initiate girls to womanhood, among other purposes.
According to “The Guardian‘s” analysis of 2014 UN data, a quarter of the women in Nigeria have undergone FGM.
Stella Mukasa, director of Gender, Violence and Rights at the International Center for Research on Women, explains the complexity of the implementation of the new law banning FGM/C.
“It is crucial that we scale up efforts to change traditional cultural views that underpin violence against women,” she wrote in an article for “The Guardian.” “Only then will this harmful practice be eliminated.”
So far women’s advocates have generally expressed optimism in the wake of Jonathan’s 11th hour action, but they caution that legislation alone will not be enough to eradicate a practice so deeply-rooted in familial and ethnic customs. Real change must be cultural, not merely political.
“We welcome this ban as we welcome any ban on FGM, in any country,” Tarah Demant, senior director for Amnesty International USA’s identity and discrimination unit, tells Quartz. “But it’s unclear whether other countries will do the same.”