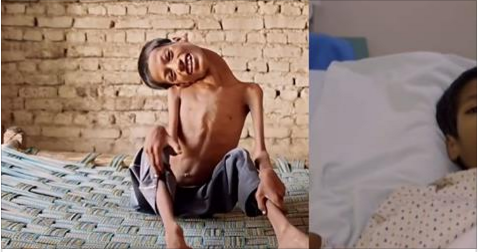 Ever since Mahendra Ahirwar was born 13-years ago, he was different than his peers. While he has an extremely hopeful and optimistic outlook on life, that wasn’t the only reason he was different. Mahendra has a rare condition that made his head hang from his neck at a 180-degree angle. He was literally looking at the world upside down.
Because the teen had a severely crooked neck, he wasn’t able to stand properly and was forced to sit. That mean he also needed help eating and going to the toilet – as well as other basic daily functions.
Besides having his neck crooked, Mahendra also stayed home all day because his mother had to work. She couldn’t bear to watch him suffer anymore and although she lived in a poor part of India, prayed that her boy would be helped…
Now the teenager can see the world “straight” because of the life-altering surgery he has had done on his neck that put his head back up as normal.
The 13-year-old boy suffered from a condition that made his neck muscles so weak his head hung down toward his chest – it was painful.
Mahendra could not live a normal life with his head upside down. He needed help with everything before he got the life-changing surgery.
Because the teen’s family was poor, the life-changing surgery came from the help of strangers. When mother of two, Julie Jones, who lives 4,000-miles away in Liverpool, UK read Mahendra’s story online – she knew she had to do something. She made it her mission to raise almost $15,000 to straighten the boy’s neck.
Now that he has had the surgery, Mahendra can do things like any other boy his age can – and he is extremely grateful for the operation.
His 41-year-old father Mukesh told MailOnline: “It’s a miracle! He looks great. His neck is straight; and his life is so very different. He’s in a good place. It was heart breaking to see him before. We were on the brink of losing him. When his neck was bent he was too shy to speak but now he feels like a normal person and we can see his confidence levels growing. He is very happy now. He says he can feel the difference and he loves it.”
Although Mahendra, who lives in Madhya Pradesh, in central India, was born normal, as he aged, his neck bones and muscles grew weak resulted in the crooked appearance.
Because the family was poor, Mahendra was resigned to living the rest of his life with the serious disability. Thankfully, Julie Jones saw his story and offered to help.
Before the surgery, his 36-year-old mother, Sumitra said, “I can’t see Mahendra suffer anymore. Watching his life is devastating. He cannot do anything by himself. He just sits in a corner of the room all day. It’s no life. I have to carry him like a baby everywhere, how will I carry him when he grows older? If doctors cannot treat my son it is better that God takes him.”
Now Mukesh said everyone is happy.
“I can finally say we are a happy family now. Happiness has found our address after Mahendra’s surgery. I feel so blessed. His mum and I had never thought about sending him to school before because he was never able to go. But now we have a responsibility to help him get an education. It’s possible for him now.”
source  healthandhealthylife.com
Posted by Unknown at 7:31 AM