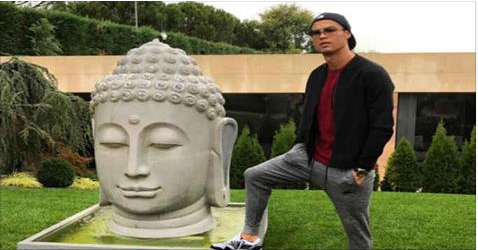 One’s religion creates a bigger image in themselves which enrich a unique discipline within them. Being a big icon in football, who is being loved by the majority of football fans around the world, this picture of Ronaldo’s is a huge disappointment to those that believes on “RESPECT” to one another.

It all began when the world-class football player posted a picture 9 hours ago on his Facebook, posing for the picture with his foot on the Buddha statue.
(His Post: facebook.com/Cristiano/photo…)
Though half of the comments in this picture had come up with frustrated feedbacks, the photo seems to be still there in the network. This is to all the people around with similar dislike towards harming another religion’s respect, please share over the few words to take down this image from its networks, as this has a greater possibility in sending a viral bad influence towards the community, especially among children, as he is their #number_one favourite.
credits   hot6today.com
Posted by Unknown at 6:50 PM