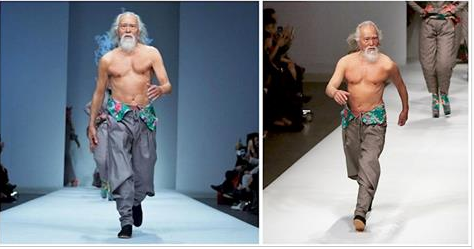 People tend to associate being old with becoming weaker or being able to do less in general. What if this preconception acts as a self-fulfilling prophecy? Maybe age shouldn't hold you back from attaining your goals.
One man, 80-year-old Deshun Wang, is crushing the stereotype that getting old means that you should just give up on life. You might be surprised to hear that he hasn't always been so physically active, having gone to the gym for the first time fairly late in his life.
This man truly shows how age shouldn't hold anyone back from their goals. You have to hear Wang's story.
SHARE this article with your Facebook friends. They are going to love this guy.

Deshun Wang is taking the world by storm after making an incredible appearance on the runway at the Chinese Fashion Week.

Here is a clip of him literally taking the runway by storm. So fierce.

In fact, he wasn't always jacked like this. He actually started going to gym for the first time at the age of 50!

His enthusiastic catwalk has made him an internet sensation and a role model for adults in their golden years.

"Believe me, potential can be explored. When you think it’s too late, be careful you don’t let that become your excuse for giving up. No one can keep you from success except yourself," Wang said.

Wang has had quite the varied life journey.

Not only is he an actor and model, he used to have his own pantomime troupe. Here he is playing the Jade Emperor in the film The Forbidden Kingdom.
Posted by Unknown at 8:13 PM