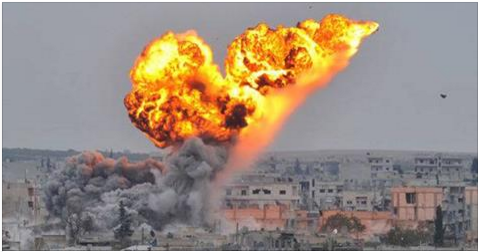 RUSSIAN jets have taken part in a devastating new offensive to claw back vast areas of Syria under the control of rebel and terrorist groups - in a major push to boost the ailing Syrian despot Bashar al-Assad.


Russian and Syrian helicopters and fighter jets - some reportedly carrying barrel bombs - struck districts in rebel-held eastern Aleppo for the first time in weeks.
UK-based war monitor the Syrian Observatory for Human Rights said at least three people had been killed.
Russia’s action in Syria comes less than a week after Donald Trump - an outspoken ally of the Kremlin - was elected as the incoming US president.
Moves to consolidate Assad’s grip on areas of the country lost to rebel group’s will be seized upon by Mr Trump’s critics as proof that a softening stance on President Vladimir Putin will only fuel Russia’s aggression. AMC
1 of 19
Young Syrian boy Omran Daqneesh, aged five, was injured during airstrikes in Aleppo
However, Russia has only confirmed its bombers have targeted Islamic State positions inside Syria and did not comment on the assault on Aleppo.
Defence Minister Sergei Shoigu said Russia had launched airstrikes against ISIS using missiles and jets flying from the country's only aircraft carrier, Admiral Kuznetsov, which is located in the eastern Mediterranean. REUTERS
A damaged hospital after an airstrike on the rebel-held town of Atareb, near Aleppo REUTERS
A damaged ambulance after the airstrikes
The top Kremlin official informed Mr Putin of the offensive and said strikes would continue to hit the terrorist group.
Syrian state television said Syria's air force had carried out strikes against what it called terrorist strongholds and supply depots in the old city of Aleppo.
Syria's government describes all rebels fighting President Bashar al-Assad as terrorists. Residents of rebel-held eastern Aleppo had earlier said strikes had hit districts of the city
source  www.express.co.uk
Posted by Unknown at 7:55 AM