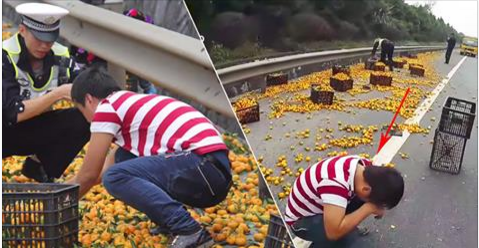 A Chinese man was left in tears after his truck carrying loads of oranges overturned on a highway, spilling the cargo. Unbeknownst to him, it was only the beginning of his major problem.


The truck overturned on a highway in rural Jiangxi province, spilling the oranges but it wasn’t the reason why the driver cried.

As the helpless driver and his nephew didn’t know what to do, villagers living near the area rushed to the scene. Though not to aid the casualties and help them, but to loot the oranges as much as they could.

The poor driver tried desperately to stop the looters but he was attacked and roughed up by the locals.

The looting only stops when the police arrived at the scene but the locals have already left with bags full of oranges. The driver told reporters that it was his first long-haul delivery, all the way from Hunan province.

Completely helpless, the driver breaks down into tears on the side of the road.


Apparently, looting of crashed good is quite common in China. Supporters of the practice believe that most of the goods are already damaged from the crash, and would go bad anyway, so why not get them? — Via: Shanghaiist
Posted by Unknown at 8:02 AM