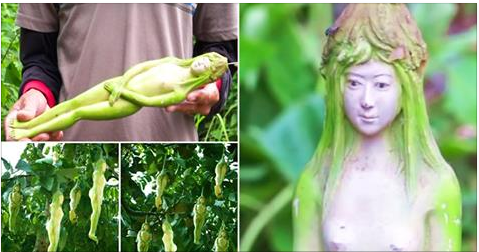 In Thailand, a mysterious tree bearing women-shaped fruits has left many baffled. But is it for real?

Footage of the said mysterious tree has been circulating online leaving many shocked but others less convinced. It is unknown what exactly the tree is as details of the story is quite insufficient.

The strange tree appears to bear fruit in the exact shape of a young woman.

The tree depicts a Nariphon, a sacred tree in Buddhist mythology, which grows the fruit of young female creatures.

According to Thai folklore, a god named Indra planted 12 special Nariphon trees in a forest called Himaphan to protect his wife Vessantara and his two children from terrifying male creatures.

The sacred trees which bear fruit in his wife’s image serve as a distraction from the evil creatures while Vessantara is picking her food in the forest. The creatures would take the fruits back to their homes, then would make love to them. After making love, they would sleep for four months and lose their powers. According to the myth, after Indra and his wife died, the trees continued to bear fruit.


There are rumored to be two Nariphon pods stored in Luang Pho Jarun at Wat Ampawan In Singburi Buddhist temple near Bangkok. Gifts inspired by the Nariphon are now sold widely throughout Thailand, leading to many hoaxes.
Via: Daily Mail
Posted by Unknown at 6:31 AM