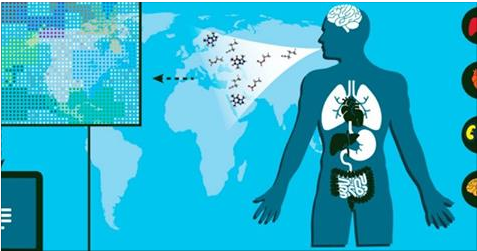 Including Parkinson's disease and kidney cancer.
Researchers have invented a device that can sniff out traces of 17 different diseases by analysing the chemical makeup of a person's breath.
This is not the first time that scientists have used a patient's breath to identify disease, but it's the first single device that can accurately check for a wide-range of ailments with one sample, including Parkinson's disease and kidney cancer.
"Since antiquity (∼400 BC), physicians learned to evaluate their patients by exhaled volatile organic compounds (VOCs), among other means, that are linked to diseases," the team, led by Hossam Haick from the Technion-Israel Institute of Technology, writes.
"For example, the stools and urine of infant noblemen were smelt daily by their physicians."
But the team decided to take this ancient practice one step further and make a device that's capable of analysing 'breathprints' of various diseases.
It works because, when you exhale, you breathe out a bunch of different things - mainly nitrogen, carbon dioxide, and oxygen - but there are also more than 100 types of volatile chemical components that come along.
The amount and specific type of VOCs exhaled largely depends on how healthy a particular person is, meaning that analysing them can lead to the diagnosis of various diseases - or at least prompt a physician to check for other symptoms.


Plus, studying breath is a lot easier than analysing other bodily fluids. As the team writes:

"Of these body fluids, exhaled breath is the most accessible and useful VOC source for monitoring bodily health and disorder. This is because exhaled breath is easily and noninvasively accessible; it is suitable for high compliance; it provides a matrix of relative low complexity, and it can be handled safely and repeated as frequently as desired."

To make the device, the team created an artificially intelligent nanoarray of highly specialised sensors that could comb through the compounds in a person’s breath to see if any of them matched up with VOCs that are commonly attributed to different diseases.
They then tested the device on multiple patients - some healthy and some who were already diagnosed with a disease - to see how accurate it was.
"A total of 2,808 breath samples were collected from 1,404 subjects having one of 17 different disease types that had been put into three main categories (cancerous, inflammatory, and neurological diseases) and one group of uncorrelated diseases, as well as a group of healthy controls," the team writes.
They found each of the 17 diseases that they searched were produced a different 'breathprint' - a different amount and combination of 13 different VOCs - that could allow them to accurately pinpoint if a participant had one of these disease or not:
The study also found that they could detect multiple diseases in one person, meaning the device could be used to check a person who had previously developed one type of cancer for alternative sources of tumours, or other conditions.
Further research on a larger pool of patients is now required before doctors can say for sure if the device will be useful in the broader medical community.
The ultimate goal is to create a portable device that can easily and quickly indicate the presence of a range of diseases to help make more accurate diagnoses in future.
The team’s work has been published in ACS Nano.

source  www.sciencealert.com
Posted by Unknown at 9:18 AM