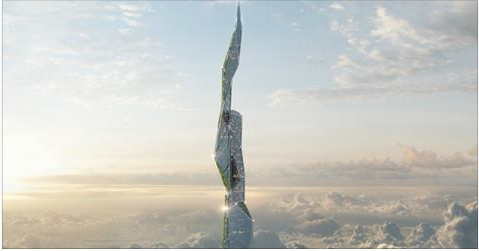 017 only just arrived, but one manufacturing company is already looking 45 years into the future.
Arconic, a materials science company, has envisioned a 3-mile-high (4.8-km) skyscraper built from materials that are either in-development or have already been brought to market, including smog-eating surfaces and retractable balconies.
The tower was concocted as part of the company’s larger campaign known as The Jetsons, an homage to the 1962 cartoon set in 2062. Arconic’s engineers worked alongside futurists to imagine the technologies that will be most useful several decades from now.
Sherri McCleary, one of Arconic’s chief materials scientists, says one of the most exciting and immediate projects is EcoClean, a special coating that helps buildings self-clean and purify the surrounding air.
It was first released in 2011 and offers a number of benefits over traditional pane glass windows, McCleary says.
"The functional coating provides aesthetics, it provides maintenance benefits, and it also provides a benefit to the surrounding environment by reducing the content of pollutants around it," she tells Business Insider.
EcoClean works with help from light and water vapour, which mix with the chemicals in the coating to produce atoms known as free radicals.


These free radicals pull in pollutants from the air and break them down to get sloughed off the side of the building along with dirt and grime - almost like dead skin.
The end result is a cleaner building surrounded by cleaner air. Arconic’s Bloomframe design for windows of the future. Image: Arconic

Another innovation is in the windows themselves. The new design is called Bloomframe. Essentially, it’s a motorised window that converts into an all-glass balcony in under a minute.
Arconic has been showcasing the technology at trade shows around the world and will hit the market in the "near future", a company spokesperson says.
Rather than spend twice the money on materials to build separate windows and ledges, Arconic wants to invest in flexible components that can make buildings more than just static giants. Skyscrapers built from 3D-printed materials could stretch more than 3 miles in the sky, Arconic says.
Some of Arconic’s other futuristic designs include flying cars, ultra-lightweight car bodies, and aerodynamic aeroplane wings.
In the meantime, it continues working to push the limits of what modern-day skyscrapers can look like and do. Thanks to 3D printing, McCleary says many structures that aren’t currently feasible could withstand high winds and unique climates.
"We’re looking at optimising the materials that can be 3D-printed to give more and more options to designers and architects," she says.
source  www.sciencealert.com
Posted by Unknown at 7:43 AM