Home » »Unlabelled » The Story Of This Woman’s Famous Tattoo Will Make Your Blood Run Cold.

The Story Of This Woman’s Famous Tattoo Will Make Your Blood Run Cold. 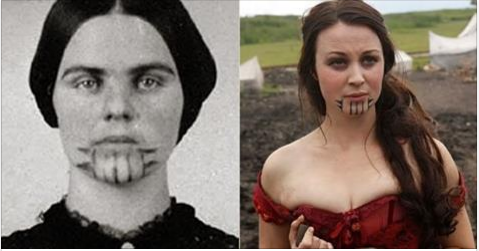 Some stories were made to be the subjects of movies and television -- Olive Oatman's tale is one such story. What started off as a typical journey across the country turned into a lifetime of strange adventures and oddities for this young woman, and no matter how many settlers tales you've read, you just don't hear stories like hers every day.
It all began when her family attempted to caravan across country in the 1850s. Suddenly, their camp was attacked by a Native American tribe, and all but Olive and her sister were brutally slaughtered (or so they thought).
What happened next is truly mind-blowing, and we wouldn't have a hard time believing it if someone like Jennifer Lawrence both starred in and won an Oscar for playing Olive in a movie. Seriously, it's just that epic. Find out what happened to Olive Oatman -- and how she came to be the only white woman of her time with tattoos on her face -- in the story below.
This is Olive Oatman.
She was born in Illinois in 1837. In 1850, when she was 14, her family (parents Royce and Mary Oatman and their seven children) joined a wagon train to travel to California.

On the fourth day of their travels, the Oatman family was attacked by a group of Native Americans
All of Oatman's family was killed by members of the Yavapai tribe. The only two that survived were her and her sister. The tribe abducted the girls and treated them as slaves.

Eventually, the Yavapai traded the girls to the Mohave tribe.
They were thought to have treated the girls better than the Yavapai -- it's said that the tribe chief adopted them as his own.

Thus began a strange and compelling life for Oatman.
And honestly, the whole thing is stranger than fiction. She's most known for the tattoos on her chin. The Mohave tattooed both Olive's and her sister's chins, a cultural tradition they believed led to a good afterlife.

In a lot of ways, she lived as a Mohave woman would have.
And by all accounts, she and her sister were treated as such.

After awhile, things got dire for the Mohaves and the Oatmans alike.
Soon after their adoption, Arizona was struck with a severe drought. This resulted in the whole tribe going hungry, and Olive's little sister starved to death.

That's when Olive decided to integrate fully into the tribe.
Rumors said that e even took a Mojave husband and had a couple of children.

But then, the rumor mill got too big.
Once the white community of settlers nearby heard of Olive's existence, a messenger arrived at the village asking for Olive's return. After negotiations, Olive and company agreed. When she did return, she was reunited with her brother -- that's right, he ended up surviving the attack years previous.

The entire thing made her an instant celebrity.
In 1857, Royal B. Stratton wrote the book Life Among the Indians about Olive and Mary Ann. It became a bestseller and paid for her and Lorenzo's education. Olive went on lecture tours to promote the book. She died in 1903 at the age of 65, but some TV and movie characters have been based on her experiences.