Home » »Unlabelled » This Young Girl Is Dead For 500 Years: What Scientists Found Will Leave You Shocked [Video]

This Young Girl Is Dead For 500 Years: What Scientists Found Will Leave You Shocked [Video] 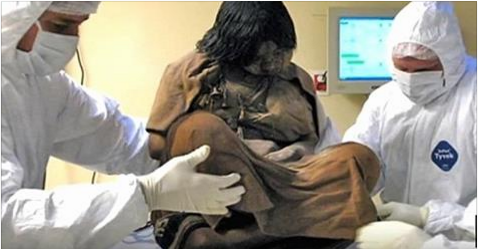 Three Inca mummies found near the lofty summit of Volcán Llullaillaco in Argentina were so well preserved that they put a human face on the ancient ritual of capacocha—which ended with their sacrifice.
Now the bodies of 13-year-old Llullaillaco Maiden and her younger companions Llullaillaco Boy and Lightning Girl have revealed that mind-altering substances played a part in their deaths and during the year-long series of ceremonial processes that prepared them for their final hours.
The Maiden and her young counterparts, found in 1999, exist in a remarkable state of natural preservation due to frigid conditions just below the mountain’s 22,110-foot (6,739-meter) summit.
“In terms of mummies that are known around the world, in my opinion she has to be the best preserved of any of the mummies that I’m aware of,” said forensic and archaeological expert Andrew Wilson, of the University of Bradford (U.K.). “She looks almost as if she’s just fallen asleep.”
It is this incredible level of preservation that made possible the kinds of technical analysis that, paired with the pristine condition of the artifacts and textiles arrayed in the tomb-like structure, allowed experts to re-create the events that took place in this thin air some 500 years ago.
“I suppose that’s what makes this all the more chilling,” Wilson added. “This isn’t a desiccated mummy or a set of bones. This is a person; this is a child. And this data that we’ve generated in our studies is really pointing to some poignant messages about her final months and years.”