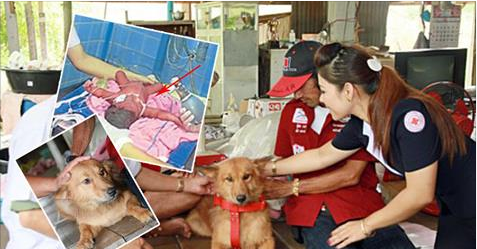 We’ve heard so many stories of dog heroism, sadly some of them have to sacrifice their lives for the sake of us humans. Dog’s ability to show humanitarian characteristic never seizes to amaze us and here’s another incredible story of a two-year-old canine who has been hailed a hero for saving a premature baby left at the roadside dump in Tha Rua district of Ayutthaya province, Bangkok, Thailand.


A Thai Bangkaew named Pui, discovered a newborn baby inside a plastic bag left to die at a roadside dumpster.

Concerned, Pui carried the bag in his mouth and brought it to his owner Gumnerd Thongmak’s home and barked loudly to get his attention.

Mr Gumnerd’s young niece, Sudarat Thongmak came to see what’s causing the noise and was shocked to find a baby with her umbilical cord still attached. Immediately, they rushed the baby to the hospital.

Doctors found out that the baby was born prematurely, around 7-and-a-half months in the womb.

Police tracked down the baby’s parents while the medics continued to treat her, which they said is now in better condition.

According to Sudarat’s mother Pummarat, the hero dog always wanders around the community, especially the nearby woods and is a bit of a watchdog of the town.
She added, “It’s lucky that Little Pui found the baby. It was a surprise to us, since Little Pui never brought anything home, only barking at strangers when he’s out and about.”

Because of Pui’s heroic deed, the local Red Cross awarded him with certificate…

A medal and a leather collar.

While Pui’s family received £200 from the Miracle of Life Foundation to pay for food for him and other dogs the family owns.

As for the premature baby girl rescued by Pui, five families have already showed interest of adopting her, but they have to wait until the baby is completely healthy.

What others are reading: How This 16 Year Old Dog Saved His Owner Makes Me Shed Tears. This Is Why Dogs Are Truly “Man’s Best Friend.”

It is truly amazing how dogs care about humans. Please share this story and let Pui’s heroism capture the hearts of many.
H/T: Dog Heirs, Daily Mail, Elite Readers
Posted by Unknown at 4:52 AM