Believe it or not, body language can tell a lot about people. Namely, did you know that the position of your legs while sitting reveals your intentions and deepest secrets, according to psychologists? So, the next time you’re around people, look at their sitting position and learn something more about their character. 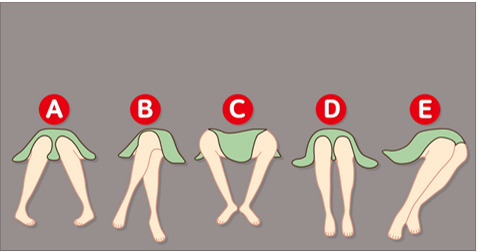 Position A
This person thinks that neglecting their problems will make the problems go away. However, this is not the way to go. Unfortunately, these people would rather transfer their issues to someone else, just so they don’t have to burden themselves and waste their precious time. The communication with these individuals goes smoothly; they’re interesting, creative, charming, and a bit childish. At times, they don’t think before they speak and realize what they’ve said after it becomes too late.
Position B
These individuals are dreamers with a vivid imagination. They’re full of good and new ideas that are often appreciated in the work place. People like this dislike routine and they love to travel and make new friends. They have no problem starting from the bottom if they’re unhappy with something. Moreover, they never waste their time on relationships that don’t make them happy or jobs that suck out their positive energy.
Position C
For these people, comfort comes first. When they want to buy something, they usually think about it for days and days and dwell on the right option because they want everything to be perfect and to go smoothly. When it comes to choosing clothes, shoes, perfumes, or furniture, they are very picky.
They are chronically disorganized, but they know how to function in a messy environment. They have a problem focusing and they have a wandering mind. This may seem arrogant to others because no one likes the other side not paying attention to what you’re saying.
Position D
People who prefer this sitting position don’t like to be late and dislike this characteristic in others. This is an intelligent and vulnerable individual whose tranquility is of utmost importance. They don’t like to quarrel with people and they feel uncomfortable expressing too many emotions publically. To them, a kiss is something intimate and they find it unpleasant to kiss in front of other people.
People who sit in this position and step on the whole foot are open and don’t have problem expressing how they feel. At times, they can be a bit rude. Those who don’t rely on the whole foot don’t have a problem confronting people. To them, socializing is similar to a battlefield and they need to be cautious of their enemies who could make their life difficult. Their home is their sanctuary where they can fully unwind. They have a hard time accepting criticism because they consider it to be a personal attack and they will immediately start defending themselves.
Position E
These people are never in a hurry and they believe that everything will come at the right time. They’re stubborn and persistent and never give up until they achieve their goal. To them, their outer appearance is crucial and they’re ready to invest a lot of effort to look as better as possible. However, this could be a sign of insecurity and lack of self-confidence. They also have a hard time accepting criticism.
Source: intellectunchained.com
Posted by Unknown at 6:02 AM