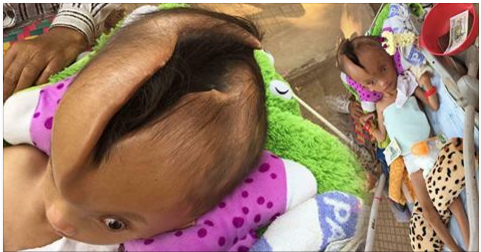 Six-year-old Pheaktra Pov has a four-inch deep crack across his entire skull which gets bigger every week. His family cries for help.

The boy’s defect was detected by doctors when the mother Srey, 40, was seven-months pregnant. They warned her that baby had a ‘problem with his head.’
Soon, the young tot was born with a small crevice on the top of his skull. Surprisingly, the doctors sent them home without any further treatment though they are baffled with it.

Since then, the hole in his head continues to get wider and deeper -it has now been stretched from his forehead to the back of his head.

Unfortunately, the doctor already gave up and told the mother, Srey that there is nothing they can do about Pheaktra’s case.
But Thorn Hong, 67, Pheaktra’s grandmother, refuse to give up. Determined to find a cure, she wheels Pheaktra around the Angkor Watt temple, Cambodia, every weekend to beg for donations for her grandson.

Thorn said: “My daughter checked when she was three-months pregnant if anything was wrong and the doctors said everything was fine. But at seven months they said there was a serious problem but it was too late to do anything. Pheaktra was born with a crack in his head and it’s getting bigger all the time. I can put my hand inside the middle, it is very big.
Pheaktra’s father left before he was born so it’s just me and my daughter who take care of him. Doctors do not know what has caused this and they said there is nothing they can do. Until he was five-years-old it seemed like there was water inside his head and it was swelling and getting bigger. I get about $10 to $25 a week from people at the Angkor Watt temple when I go on a Friday, Saturday, and Sunday.”

Despite the free medicine supply given by local charities to Pheaktra, it is only for the prevention of seizures but it has no effect on boy’s crack in the head.
Thorn added: “The children’s hospital gives us some medicine but it is just to make Pheaktra feel better. We pray every day for somebody in the world that knows how to fix this.”
Via: Mirror
Posted by Unknown at 7:02 AM