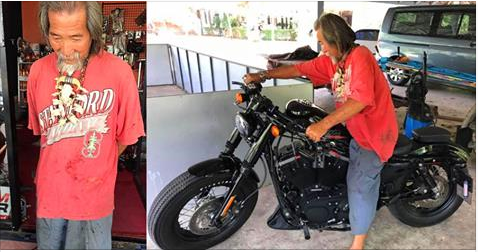 If you own or work in a high-end store and a shabbily dressed man walked in to look around, what would you do?

An old man came in to check out big bikes in a shop named Maxsingburibigbike (Maxsingburi Bike Shop) located in Amphoe Khai Bang Rachan in Sing Buri, Thailand. He wore slippers and was dressed in simple clothes that looked worn out and tattered.

Being dressed like a poor person, the salespeople assumed he was probably there just to look around and ignored him.

But the man didn’t care what anyone thought. He kept looking around and was obviously very happy and excited to see a Harley Davidson, his dream motorcycle!
Sanook, a Thailand-based news site, reported that the man stayed in the shop for a considerable amount of time and checked out a Harley worth around 600,000 baht ($17,361).
The old man who was still being ignored by the salespeople called the attention of the shop owner. Luckily, the owner was kind enough to speak to him and they ended up talking for 10 minutes!

What happened next shocked everyone. After all queries about his favorite motorcycle were answered by the owner, he brought out 600,000 baht and paid for the Harley in cold hard cash!

It was truly a “shut up and take my money” moment!

Some people in the store took pictures of the man and posted on their Facebook pages. The store also posted about him on its Facebook page. The story became viral to the point where the store had to take down its original post due to some wrong information and controversy.
According to Sanook, one Facebook user who turned out to be the sister of the elderly man identified him as “Lung Decha”. She wrote a Facebook comment to share that her brother was just a simple, regular guy who spent all of his life working as a mechanic. Now that he is retired, he just wanted to fulfill his lifelong dream of owning a Harley Davidson. He finally gave in and used his hard-earned money to make his dream come true!

Lung came back to the store to have some customized features done to his motorcycle.

This time, he dressed up like a true big biker!