An elderly man was viciously attacked by a teen with a cane without any reason in broad daylight. 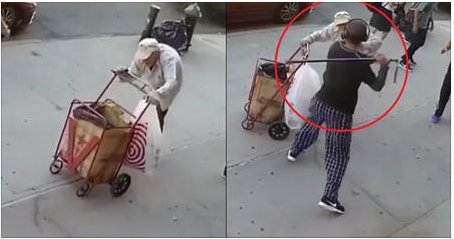 The 90-year-old man named Juan Llorens was a familiar figure in the neighborhood of Manhattan New York and known to roam around collecting plastic bottles and cans for recycling. However, while the old man was pushing his cart down to get food, a teen suddenly attacks him.

Unsatisfied with the kicking, he then strikes him with a cane on the head.

Good thing passersby immediately stepped in and defended the innocent old man from the beating.


The attacker was identified by the police as Saul Nunez, 19 years-old. He was arrested and charged with assault after the officers’ gets hold of the CCTV.

Sadly, the senseless made Juan Llorens deaf on one ear.

But despite the unprovoked attack, Juan is still in high spirit and has forgiven his assailant.
Via: Metro
Posted by Unknown at 11:30 PM