Home » »Unlabelled » He Thought It Was Just A Varicose Vein In His Foot, Was Horrified To Know What Exactly It Is

He Thought It Was Just A Varicose Vein In His Foot, Was Horrified To Know What Exactly It Is

This is the spine-chilling moment when a 42-year-old man thought he has a varicose vein in his foot, but was shocked to find out what exactly it is.


At first, the man felt a bizarre itchy rash in his foot after returning from a holiday in Nigeria. He thought it was a varicose vein, but he became suspicious after the strange object started to move up to a couple of centimeters each day.

So he went to the doctors a month after discovering the odd vein-like thing in his foot. 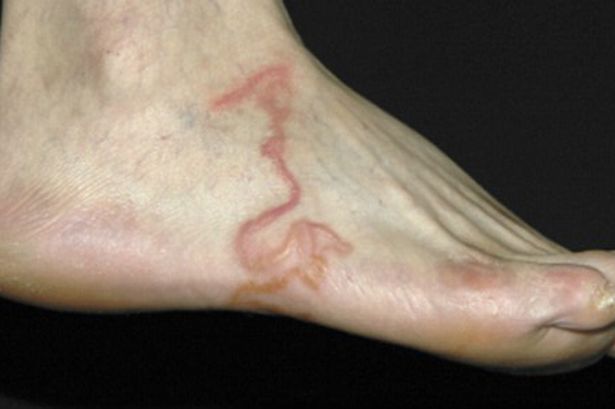 But after examining his foot, medics at the Peking Union Medical College, in Beijing revealed a shocking news. They found a red, raised tract with a wavy margin inside.

Apparently, he had a cutaneous larva migrans – a parasitic skin infection caused by hookworm larvae.

Hookworms are parasites which humans commonly contracted through roundworm eggs and larvae found in dirty soils contaminated by feces. Cutaneous larva migrans are normally seen on the feet, back, buttocks, thighs, or abdomen and usually confined to the epidermis as it cannot break through to lower layers of skin.

This kind of parasite is the most common skin disease among travelers returning from tropical countries, according to a paper in the journal Clinical Infectious Diseases.

The man made a complete recovery later on, according to the doctors who published their research in the New England Journal of Medicine.
The authors also said that, “The best way to avoid infection is to ban dogs from beaches”
Via: Mirror
Posted by Unknown at 6:09 AM