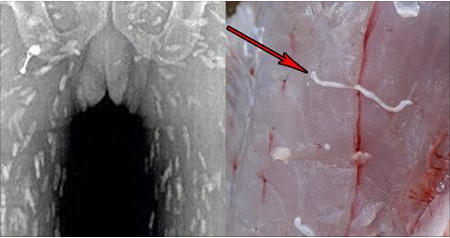 Sushi is one of the many intriguing delicacies of Japanese Cuisine. Some loved it and some think the other way. The reason behind this rejection is simply because some of the ingredients of this food are eaten raw, like fish. Yes, uncooked, freshly cut and served right in front you (in Japanese resto).


But sometimes, eating raw fish or meat has a major risk. You don’t know if the food is contaminated with bacteria, disease and especially tapeworms. You will ever know these unless you look at it under a microscope but you can’t, so better cook your food properly. Recently my wife had this experience, she saw a worm inside the fish belly while she’s cleaning it and it’s really disgusting.
Many will ignore this danger because for them, eating raw food gives them a different taste and satisfaction. Who are we to take that away from them, but a man from China loves sashimi so much especially sushi…

But his obsession for this delicacy almost took his life because his entire body is infected with tapeworms. Yes, tapeworms!

He went to see a doctor because of stomach ache and itchy skin, to his horror, scans revealed his entire body had been infected with tapeworm after eating too much sushi. The doctor believes that the raw fish used in sushi is contaminated with tapeworm. The Chinese man was treated at the Guangzhou No. 8 People’s Hospital in Guangdong Province, in eastern China.

Research has shown that eating raw or undercooked fish can lead to a variety of parasitic infections.

Tapeworm infections occur after ingesting the larvae of diphyllobothrium, found in freshwater fish such as salmon, although marinated and smoked fish can also transmit the worm.

Dr. Yin, of Guangzhou No. 8 People’s Hospital says: “Eating uncooked food contaminated with tapeworms’ eggs could eventually cause cysticercosis when the adult worms enter a person’s bloodstream. This type of infection can be fatal once it reaches the brain.”
Related: 10 Most Unusual Liquors and Alcoholic Beverages

We can’t stop you from eating the food that you want, but this Chinese man will serve as a warning before eating raw fish or food. There are increased cases of tapeworm infection in poor areas as well as developed countries. So it’s better to be knowledgeable about these facts and be safe.
So would you still eat uncooked foods? —Daily Mail
Posted by Unknown at 8:51 AM