An early draft of the Bible has been discovered at the University of Cambridge in the UK that has been marked as one of the most significant discoveries in modern history. The handwritten draft was found after it had been mislabeled inside an archive and had gone undetected for decades. 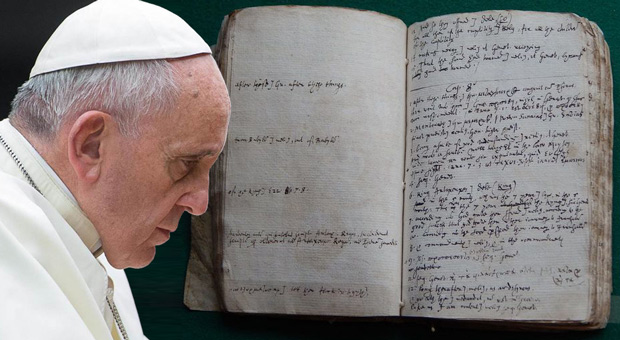 The book has been confirmed by leading experts as an early working of The King James Bible which is one of the most influential and widely read books in the English language. The discovery has been hailed as definitive proof that Bible is a work of fiction as it shows a process of revising, cutting, and then more rewriting, which contradicts popular belief that the book is the "divine word of God". The King James Bible or simply the Authorized Version, is an English translation of the Christian Bible for the Church of England that combines books from the Old and New Testaments as well as other Christian scriptures. The notes and commentary in the recently discovered draft of this book show how "best bits" were cherry-picked from the original books and were then embellished, exaggerated or rewritten to make for "better reading". There are also indications that sections were written under orders from the King to that would conform to the idea that the Royal bloodline was a divine one, to instill a false belief in the "common" people that the hierarchy of the ruling Elites was justified. The notebook containing the draft was found by an American scholar, Jeffrey Alan Miller, an assistant professor of English at Montclair State University in New Jersey, who announced his research in an article in The Times Literary Supplement. Mr. Miller was researching an essay about Samuel Ward, one of the King James translators, and was hoping to find an unknown letter at the archives. While you can say he certainly accomplished that end, he definitely wasn't expecting to find the earliest draft of the King James Bible — which is now giving new insights into how the Bible was constructed. He first came across the plain notebook not knowing what it was — it was incorrectly labeled. That's why no one has found it until now. It had been cataloged in the 1980s as a “verse-by-verse” Biblical commentary with “Greek word studies, and some Hebrew notes.” When he tried in vain to figure out which passages of the Bible the commentary was referring to, he realized that it was no commentary at all — it was an early draft of part of the King James Version of the Bible. Professor Miller described what it felt like when he first knew what he had in his hands: “There was a kind of thunderstruck, leap-out-of-bathtub moment. But then comes the more laborious process of making sure you are 100 percent correct.” The material in the manuscript discovered by Miller covers the apocryphal books called Esdras and Wisdom and seems to show that the translation process at Cambridge worked completely different than what researchers had previously known. Until now, it had been assumed that six different teams, or companies of translators that is, had worked more collaboratively rather than individually. Yet — this draft throws that idea out the window.


Ward's draft seems to indicate the people were assigned individual sections of the Bible and then worked on them almost entirely by themselves — a massive undertaking with little guesswork. You would think this would cause people to become more error prone. In fact, quite hilariously, Professor Miller noticed that the draft suggests that Ward was picking up the slack for another translator. This really shows how human the entire job was, according to him. “Some of them, being typical academics, either fell down on the job or just decided not to do it. It really testifies to the human element of this kind of great undertaking.” While this finding certainly doesn't disprove God, it does show that the translators of the Bible didn't get a finalized product the first go around — it wasn't a walk in the park with an angel over their shoulder telling them what to write. It does, however, offer definitive proof that the Bible isn't the "actual word of God" and that the words in the Bible shouldn't be taken literally. The finding clearly shows how people can be manipulated into submission by offering up stories of other human beings who have "divine powers" as a way of controlling them, in a way not too dissimilar from the way governments use the mainstream media to brainwash the public today. This book took many different individuals, working separately — and they often suffered from man-made struggles, like meeting deadlines. You know, now that we think of it, doesn't sound that much different from the writers of today's workforce.


via Neon Nettle
Posted by Unknown at 8:08 AM