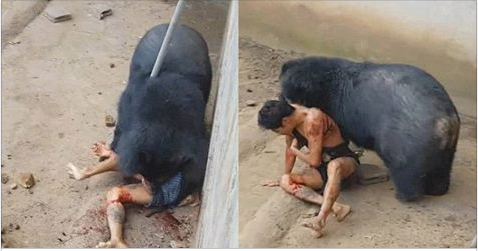 A male tourist who visited Wat Luang Phor Lamai temple decided to taunt a hungry bear and paid a huge price for his stupidity.

Naiphum Promratee, 36, started teasing the bear by poking and hanging bowls of rice through a rope into the bear cage.

But it only made the bear angry and dragged him inside the cage, knocking him unconsciously. The bear then tried ripping off his flesh.

According to the staff from the emergency services, “The man had gone to the temple with four or five friends and he was toying with the hungry bear. The bear attacked him and pulled him in.”

And poked the bear with a metal pole but the creature won’t budge.

The bear then started pulling the defenseless man to the main cage and continued to maul him.

Friends of Promratee started crying as the bear tried to tear his body apart.

Luckily, one brave female went inside the cage and hit the bear with a stick while Promratee’s friends help him escape.

The rescue service staff said, “We received a report of a bear attack at 11:00 am…he was lucky to survive and he is in the hospital now and able to talk.”

A spokesperson for People for the Ethical Treatment of Animals (PETA) warned that “If you taunt a hungry bear, you’re likely to get hurt.”

“Bears are powerful predators who, in the wild, spend most of their time foraging and exploring home ranges that may cover thousands of miles, and smart people respect them enough to leave them alone. While this man got away his life, bears around the world will continue to live and die in misery as long as humans still incarcerate animals in the name of entertainment,” PETA stated.

Unfortunately for Promratee, a monk and the head of the temple admitted that many of the animals in their care are “hungry” because they can’t give them enough food.
Apparently, Monks in Wat Luang Phor Lamai temple have been appealing to the public and visitors to give donations and feed the animals while on tour.
Meanwhile, Naiphum Promratee is now in a stable condition.
Via: Elite Readers
Posted by Unknown at 5:29 AM