Home » »Unlabelled » SHOCK: Airliner Skids Off Runway And Over A Cliff, Nearly Plummeting To Destruction

SHOCK: Airliner Skids Off Runway And Over A Cliff, Nearly Plummeting To Destruction 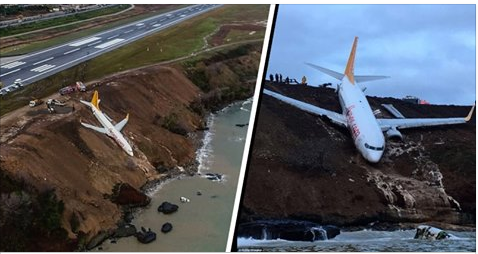 A harrowing scene unfolded in Turkey on Saturday as a passenger airplane holding 168 people skidded off a runway, over the edge of a cliff, and nearly plummeted into the icy water below.

Images from the event show the precarious balance between life and death. Men, women, and children screamed and cried while attempting to evacuate.
“We tilted to the side, the front was down while the plane’s rear was up,” said passenger Fatma Gordu. “There was panic. People shouting, screaming.”

Official reports now indicate that the flight, which landed at Trabzon Airport and was arriving from the Turkish capital of Ankara, was making its way across the runway when it skidded off and careened over the edge of a nearby cliff.
The Daily Mail reports:
“Panic spread through the Boeing 737-800 as it stopped at the edge of the Black Sea – with its nose dangling precariously off a cliff edge.
“Luckily, flight PC8622’s wheels became stuck in icy mud as it left the runway at Trabzon Airport, which may have preventing it from entering the sea.
“Pegasus Airlines confirmed in a statement there were no injuries among the 162 passengers onboard as well as two pilots and four cabin crew after they were evacuated.”

Footage shot from within the plane is even more unsettling as passengers—children included—are heard crying in terror.
There also appears to be smoke billowing from somewhere inside, though no evidence yet suggests there was any actual blaze.
The airport shut down operations while dealing with and resolving the matter, though it eventually reopened on Sunday morning.
Trabzon’s governor, Yucel Yavuz, stated, “We’ve taken all necessary measures. We will reopen the airport to air traffic as soon as possible,” adding that all passengers survived without injury and that there was a “crisis desk” set up at the airport to address anyone’s needs.
Source:The Daily Mail