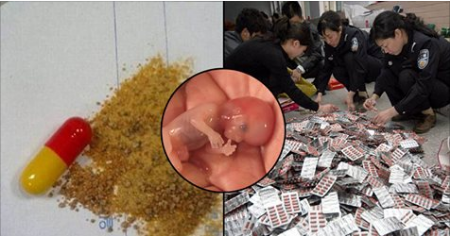 When it comes to disturbing, disgusting, and unbelievable things, China is probably on top of the list. We’ve been seeing a lot of them lately and many are left shaking their heads with a sickened face.
And to add another one to their long list, South Korean customs seized thousands of pills filled with powdered human flesh. Yes, you read it right, powdered human flesh!

The capsules are in demand because it is being introduced as a ‘cure-all’ medicine, but in reality, the ‘dead baby pills’ contain super-bacteria and other harmful ingredients.

South Korean have been on heighten alert on this barbaric practice after Seoul Broadcasting System (SBS) showed a film on Chinese doctors eating aborted fetuses. It also showed one Chinese doctor took out fetuses from his refrigerator.
Tests proved that the powdered thing inside the capsule is 99.7 percent human flesh. Since then, South Korean government have stopped 17,000 fetus capsules being imported from China.

“The grim trade is being run from China where corrupt medical staff are said to be tipping off medical companies when babies are aborted or delivered still-born. The tiny corpses are then bought, stored in household refrigerators in homes of those involved in the trade before they are removed and taken to clinics where they are placed in medical drying microwaves. Once the skin is tinder dry, it is pummeled into powder and then processed into capsules along with herbs to disguise the true ingredients from health investigators and customs officers.” Read more HERE.

But the Chinese authorities are denying the said allegation that the pills are manufactured in China.

China’s Ministry of Health spokesman stated that their investigation shows no proof that those pills containing human fetus flesh came and manufactured from China.
Health authorities in Asia are concerned that if the powdered fetus trade is allowed to continue the capsules will find their way onto the internet and be sold to gullible or sick desperate people in other parts of the world.

Although this report was published on May 2012 it is still alarming that such kind of doings existed. We are just hoping that these horrific act had been stop and people responsible for disrespecting these fetuses are now rotting in jail!
Sources:  dailymail, washingtontimes
Posted by Unknown at 4:15 PM