( L-o-v-e ) Connection From Past Existence 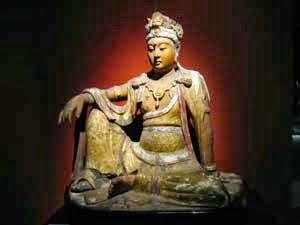 (L-o-v-e) Connection From Past Existence
The l-o-v-e between two people, whether it is l-o-v-e t ﬁrst sight, or l-o-v-e that slowly blossoms, has a lot to do with their relationships in previous lives. The Lord Buddha explained that l-o-v-e develops from two main causes: the couple may have been husband and wife in previous lives; or have cared for each other in the present life.

Take the case of Prince Siddhattha (the Buddha himself, before renouncing the world and entered ordination) and his wife, Princess Bimba. They had pursued Perfections (supreme virtues to be performed by one who wishes to attain enlightenment otherwise known as parami) together throughout many past lifetimes. In one lifetime, Siddhattha was born as an ascetic named Sumedha, a Bodhisatta (one who is destined to be a Buddha) who dedicated himself in the pursuit of Perﬁctiom.

Once upon a time, a Buddha of that epoch named Dipankaraand his disciples were passing through a city and approached a large puddle of Water in their path. In a virtuous act,Sumedha laid his body across the puddle to let Dipankara Buddha and his disciples walk over to the other side, so they Would not get wet. Dipankara Buddha prophesied that Sumedha would become the next Buddha, known as Gotama.

Bimba was a village Woman in that lifetime. She and Sumedha did not know each other. Upon seeing  Sumedha’s admirable act, she became fond of him and fell in l-o-v-e  She made an earnest wish to become Sumedha’s wife, and to be reborn as his wife in every future lifetime.

From that lifetime onwards, whenever Princess Bimba was reborn, she would become his life partner, and would pursue Perfection: together until their ﬁnal lifetime, where they separately attained Nibbana (known as nirvana in sanskrit) and were no longer subjected to rebirth.

l-o-v-e and bond grounded on virtues bind a couple together through many lifetimes. Their past connection leads them to fall in l-o-v-e nd care for each other. Some couples feel an instant connection, because they have made earnest wishes from a previous existence to meet again in future lives. "Hus explains why some people fall in l-o-v-e at ﬁrst sight.

Although a connection from previous existences may exist for many couples, it does not mean that theirl-o-v-ewill necessarily be smooth and happy.

When people are young and fall in l-o-v-e for the ﬁrst time, they tend to be sweet and affectionate to each other. Some would even make resolutions or vows promising to l-o-v-e each other and live together forever. These
are the kinds of wishes that are often made by people who are experiencing a new l-o-v-e.

Once they have been together long enough, their passion for each other may gradually diminish and they soon stop making efforts to please each other. As people get older, they naturally become less attractive,

and may even seem to appear ‘boring’ to each other. When a husband or wife looks for a way out, or gets attracted by someone who is more appealing, this is when all the problems turn into chaos and start to wreck a marriage.

Living together with another person is likened to wearing bracelets; a single bracelet makes no noise, but when two bracelets are worn together, they rattle and jangle.

Actions in the present lifetime also matter a great deal. Couples who are true friends and encourage good things for each other tend to be happier and stay together longer. As for those couples who have not performed many merits together, their l-o-v-e for each other will dissipate over time. lhey will end up separating from each other through divorce or death.

The length of time a couple might live together is determined by the merits they have accrued together in previous lifetimes, by whether they have been l-o-v-ers in their past existences and also by how supportive they were of each other in their present lifetime. Like a lotus that relies on the combination of
water and earth to grow, success of the l-o-v-ebetween two people depends heavily on the above-mentioned factors.

Although relationships from a previous lifetime may be a catalyst for current l-o-v-e  we still need to be prudent and apply wise principles when selecting the right life partner. l-o-v-e alone is not sufﬁcient to determine whether a person will be one’s best life partner.

In choosing a life partner, We should look for someone who shares the same views as ourselves, and who has mutual respect for each other. Since this person will likely be the parent to our children, he or she has to be a
good role model for them. We should not base our decision mainly on physical appearance, wealth and personal abilities.

Physical attraction is short-lived. We should determine whether our life partner has similar virtues as ourselves, that is, similar faith, morality and views. Do they have a strong faith in Faith in the triple Gem (triple refuge consisting of Buddha, Dhamma and Sangha)as we do? Do they observe the Five Precepts (codes of moral conduct)? Do they possess the Right View (right understanding of the Truth)? Do they believe in the Law of Kamma (law of cause and effect), etc? If these virtuous qualities are shared, there is a better chance of building a long-lasting marriage.

In the beginning of a relationship, we are often contrived to make ourselves attractive. Sometimes, we do things beyond our normal behaviour in order to attract the other person to fall in l-o-v-e with us. Unfortunately, this strategy
will not lead to a happy union. We have to take the time to learn about the other person’s true self, just as he or she ought to learn about ours.Once a foundation of mutual understanding, mutual respect and shared virtues is built, a happy marriage will follow.

Marriage a Dhamma point of view

Marriage forms an integral part of our lives.Thus, before we enter this union, we need
to analyse carefully the reason why we marry. If we cannot ﬁnd a good reason, it means that we are probably not ready to marry. l-o-v-e alone is not reliable, because it is likely we may change our minds later. There should be something greater, something that makes a marriage worthwhile, a binding of two lives.

Whoever wants to enter a marriage should contemplate carefully. Indeed, the purpose of marriage is to be a true friend to one another, to look out for each other, and to be a partner in the pursuit of Perﬁctions. Ideally, a married couple should share an equal faith in The Triple Gem, The Five Precepts, The right View and The Law of Kamma.

In life, we will encounter many obstacles, stress and problems because our world is governed by what is known as The Eight worldly Conditions (Lokadhamma), which states that “nothing is constant, everything is subjected to change”. These conditions comprise gain and loss, dignity and obscurity, praise and blame, as well as happiness and pain.

Our attachment to worldly matters always results in suffering. As a result, our efforts in the pursuit of Perfections can run into obstacles and we can lose sight of the ultimate goal of achieving Nibbana.A good soulmate can play an important role in steering us back onto the right path,the pathof Dhmmma. If our partner falters in his or her pursuit of Perﬁctions, it should also be our responsibility to help the person get back on the path.