Home » »Unlabelled » The Position of Women in Buddhism

The Position of Women in Buddhism 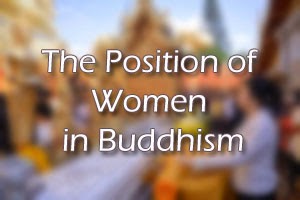 by Dr. (Mrs.) L.S. Dewaraja
Today, when the role of Women in Society is an issue of worldwide interest it is opportune that we should pause to look at it from a Buddhist perspective.

In the recent past, a number of books have been written on the changing status of women in Hindu and Islamic societies, but with regard to women in Buddhism, ever since the distinguished Pali scholar, Miss I.B. Horner, wrote her book on Women under Primitive Buddhism, as far back as 1930, very little interest has been taken in the subject.
It seems, therefore, justified to raise again the question whether the position of women in Buddhist societies was better than that in non-Buddhist societies of Asia. We will look briefly into the position in Sri Lanka, Thailand, Burma and Tibet, at a time before the impact of the West was ever felt.
Hugh Boyd who came as an envoy to the Kandyan Court in 1782 writes,[1]
The Cingalese women exhibit a striking contrast to those of all other Oriental Nations in some of the most prominent and distinctive features of their character. Instead of that lazy apathy, insipid modesty and sour austerity, which have characterized the sex throughout the Asiatick world, in every period of its history, in this island they possess that active sensibility, winning bashfulness and amicable ease, for which the women of modern Europe are peculiarly famed. The Cingalese women are not merely the slaves and mistresses, but in many respects the companions and friends of their husbands; for though the men be authorized by law to hold their daughters in tyrannical subjection, yet their sociable and placable dispositions, soften the rigor of their domestic policy. And polygamy being unknown and divorce permitted among the Cingalese, the men have none of that constitutional jealousy, which has given birth to the voluptuous and unmanly despotism that is practiced over the weaker sex in the most enlightened nations, and sanctioned by the various religions of Asia. The Cingalese neither keep their women in confinement nor impose on them any humiliating restraints.
The above quotation is just one selected from a series of comments which European observers have made on the women of Sri Lanka. Many of these European visitors to our shores came during the 17th, 18th and early 19th centuries. There were among them, envoys, missionaries, administrators, soldiers, physicians and ship-wrecked mariners. They had first-hand knowledge of the women in Europe and many of them came through India having observed the women in Hindu and Islamic societies
Hence their evidence is all the more valuable. The recurring comments made by these widely traveled visitors on the women of Sri Lanka have evoked our curiosity to conduct this inquiry. The discussion that follows will deal with condition that prevailed up to the middle of the nineteenth century. Prior to this our sources are so meager that we cannot detect any major social changes. After this, due to the impact of Western imperialism, commercial enterprise and Christian missionary activity, incipient changes in the traditional structures become perceptible.
It is only in European writings that one finds lengthy accounts of the social conditions prevailing in the island. The indigenous literature, being mainly religious, lacks information regarding mundane topics like women. But from circumstantial evidence one could surmise that the liberal attitude towards women in Sri Lanka is a trend that has continued from the remote past. When one thinks of women in the traditional East, the picture that comes to our minds is that of the veiled women of Islamic societies, the zenanas where high class Indian ladies lived in seclusion, the harems of Imperial china where lived thousands of royal concubines guarded by eunuchs, the devadasis who in the name of God were forced into a life of religious prostitution; all manifesting different aspects of the exploitation of women in the East. It is little known that there were societies in Asia where the position of women was a favorable one, judging even from modern standards. Thailand and Burma too belong to this category. In those instances also we have based our conclusions mainly on the observations of Europeans who lived in these two countries in various capacities in the 19th and 20th centuries. R. Grant Brown, who was a revenue officer for 28 years in Burma (1889-1917) has remarked,