How amazing would it be to an aquatic explorer? You'd spend your life looking for the lost remnants of ships from the past, deep below the ocean's surface. You'd find lost treasure and other valuables scattered across the ocean floor or in old shipwrecks. Maybe one day you'd find the mother of all aquatic treasures - the lost city of Atlantis. (Plus...sharks!)
Underwater archaeologist Frank Goddio may not have found Atlantis, but he found something close. In the Mediterranean Sea, in the Abu Qir Bay on the coast of Egypt, there lies the sunken Egytian city of Thonis-Heracleion.

That's right, a sunken city, lost thousands of years ago, was found in the Mediterranean Sea. 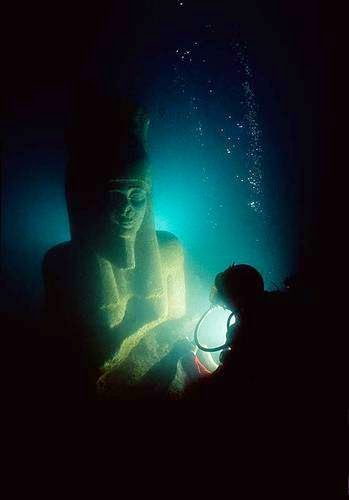 Thonis Heracleion was a port city for Egypt founded in the 8th century B.C.

Due to a series of natural disasters, the city was lost to the sea in the 8th century A.D.

Frank Goddio and his team discovered the lost city, along with tons of artifacts and treasures from the ancient world.

Here are some divers inspecting this ancient statue of a pharaoh.

The team of divers were very careful when removing these ancient statues and bringing them to the surface.

These really are incredible objects, and ones that give us information about this city and its culture.

It's incredible how long these relics were lost deep in the Abu Qir Bay.

This really was a monumental discovery, and certainly a dream for any underwater archaeologist.

(via: reddit.com)
This is one of the coolest discoveries I've ever seen, and considering we've only explored around 5% of all the oceans on this planet, imagine how much more there is to discover.
Posted by Unknown at 5:48 AM