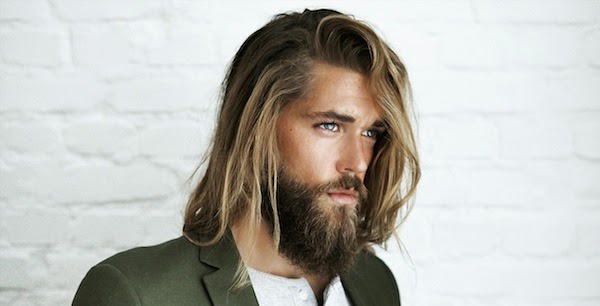 There has been a relatively new trend set off in recent years — a regression to primal urges — where women find themselves attracted to men with facial and body hair.
Where our mothers had a thing for the clean-cut, well-groomed man, associating him with success and financial security, we ladies of the Millennial generation are finding ourselves enticed by the burly, more rugged hairy men.
If you’ve heard of Lumbersexuals, you’ll know what I’m talking about. A generous amount of body fuzz is no longer seen as an indicator of the scraggily or unmotivated, but rather the strong, independent and wise.
We’ve all been made aware of the merits of dating men with man bunsand hairy chests. These men are strong, mature and virile.
And, likewise, there are countless reasons a girl should want to date a man with a beard. There is something even manlier and more primal about a beard than either a man bun or a hairy chest.
A beard is right there on a guy’s face. It’s the first thing a person will notice, and the first thing a guy will be asked about.
The man with a beard is a confident, desirable man. He’ll make a better boyfriend and, one day, a better father to your perfect offspring.
Here are 21 completely logical reasons why you should always date the guy who has a beard:

1. Beards are rugged and manly.

A man with a beard is just plain sexier than a man with a baby-bare face — just look at this guy. A girl loves a guy who looks like a manly beast.
Sometimes we just want to be manhandled, and a beard is a dead ringer for getting that kind of aggressive action. Not to mention, it looks like he could build you a house with his bare hands — and I am all about that.

Kissing a man with a beard tickles in a good way. It’s a little like receiving a free chin scratch. Also, there’s something decidedly aggressive about making out with a bearded man.

Holla! Nothing better than a beard on inner thighs, trust me. Once you go beard, you will never go back. Is that the saying? Well, it should be.

4. He looks good when he’s all dressed up.

A beard is a great contrast against a suit or a slick button up. Having a burly bit of facial hair adds a sense of the strapping woodcutter complemented by a stylish outfit. His beard also allows for a more acute confidence in your man, making him all that more appealing as your strapping arm candy.

Men are a lot like dogs. They like to be rubbed and scratched. Having a beard is like having another pet. You can run your hands along his brawny mug instead of just plain old bare skin — and the ignited nerve-endings sure will be delighted.

A beard is like a sweater for his face. You won’t have to worry about your boo getting chilly when facing the winter wind. It’s a natural fighter against the elements. No walking pneumonia for your man.

7. He allows you to relive that rebellious streak from high school.

Beards have long since been aligned with “bad boys.” The guy who could grow a beard in high school probably had a motorcycle and a tattoo, making him the absolute worst nightmare for your parents.
Dating a guy with a beard later in life allows for that sexy rebelliousness you may not have gotten to explore, but without all of the added drama or encounters with the police.

8. Men with beards are healthier.

According to science, men with beards lead a healthier existence. The University of Southern Queensland published the results of a 2013 study on men with beards in the Radiation Protection Dosimetry Journal, finding that beards “block 90 to 95 percent of UV rays, slowing the aging process and reducing skin cancer.”

Lumbersexual: being attracted to men who look like lumberjacks. Yes, it’s a very real thing. Sometimes you just want to get down with someone who can handle an axe and who likes to build fires, all while sporting a full beard and a flannel. Phew… getting a little hot just thinking about it, you know?

There’s a certain air of maturity around a man with a beard. Women tend to be attracted to older, worldlier guys and a beard is the perfect complement to that image.

11. It’s a symbol of virility and wisdom.

Historically, growing facial hair is attributed to puberty and the onset of manhood. The ability to grow a beard shows how men are becoming wiser, more mature and ready to make lots of babies, which of course makes our lady hormones go bonkers.

12. It makes them mysterious.

A man with a beard just seems sure of himself, all while maintaining an image of dark sophistication. There is something sexy and mysterious about a guy who dons a well-groomed bit of facial hair.

Just like Nick Offerman’s mustache, a beard demands respect from other men. Men want to be able to grow facial hair and demonstrate their sturdy manliness. When a man has a beard, he generates his Alpha status, making other males quake in his presence and look to him for guidance.

If he took the time to grow a beard, he clearly has no problem waiting for things to unfold. He isn’t hasty or rash; he is cool and calculating — letting everything he sets out to accomplish come to fruition in good time. He understands that a thing is better done with care to make it its best rather than done quickly and have it be subpar.

To commit to a beard is a big deal. Their maintenance is akin to the maintenance we ladies have to commit to when dealing with our bikini lines (though way less painful). They need to be trimmed, conditioned and managed with care. A guy with a beard is not some slovenly bum; he’s a man who is willing to take care of himself.

You can do so much with a beard! Flowers, Christmas ornaments… there are so many different ways to have fun with a beard. It might be the most hipster thing on earth, but that doesn’t mean it isn’t super, super fun.

A beard just makes any man look more like the Son of God. And who isn’t going to want to jump on that? (And if he doesn’t have the abs, he might as well have the beard.)

He’ll always be a classic. Like Ernest Hemingway, your boyfriend is a tale as old as time. He’ll never go out of style, and he’ll always have an appreciation for the more refined.

20. He’ll always have conditioner at his apartment.

Honestly, dating a guy you don’t have to lug conditioner around for? Sign me up. The last thing I want to deal with is having my conditioner explode all over my overnight bag because I forgot (read: pressed snooze four times) to wash my hair in the morning.

Read whatever you want from this one. I know when I see a guy with an impressive beard, I always think to myself, “If that guy can grow a beard like that, I bet he is well-endowed.”
source elitedaily.com
Posted by Unknown at 8:45 PM