Home » »Unlabelled » Man Pushes Wife To Save Himself From A Sinking Cruise Ship. But The Reality Is Priceless.

Man Pushes Wife To Save Himself From A Sinking Cruise Ship. But The Reality Is Priceless. 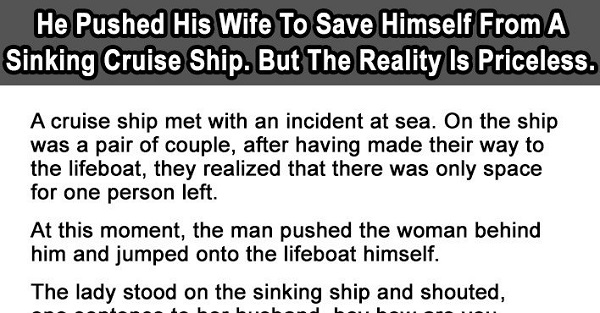 Man Pushes Wife To Save Himself From A Sinking Cruise Ship. But The Reality Is Priceless.
A teacher was tutoring a class of students when she relayed a story about a cruise ship capsized while at sea, and on the ship was a couple that managed to make their way to a lifeboat but realized there was only space for one. You’ll never guess what lesson they learned from the story.
A cruise ship met with an incident at sea. On the ship was a couple, after having made their way to the lifeboat, they realized that there was only space for one person left.
At this moment, the man pushed the woman behind him and jumped onto the lifeboat himself.
The lady stood on the sinking ship and shouted one sentence to her husband.
The teacher stopped and asked, “What do you think she shouted?”
Most of the students excitedly answered, “I hate you! I was blind!”
Now, the teacher noticed a boy who was silent throughout, she got him to answer and he replied, “Teacher, I believe she would have shouted – Take care of our child!”
The teacher was surprised, asking “Have you heard this story before?”
The boy shook his head, “Nope, but that was what my mom told my dad before she died to disease”.
The teacher lamented, “The answer is right”.
The cruise ship sunk. The man went home and brought up their daughter single-handedly.
Many years later after the death of the man, their daughter found his diary while tidying his belongings.
It turns out that when parents went onto the cruise ship, the mother was already diagnosed with a terminal illness. At the critical moment, the father rushed to the only chance of survival.
He wrote in his diary, “How I wished to sink to the bottom of the ocean with you, but for the sake of our daughter, I can only let you lie forever below the sea alone”.
The story is finished, the class was silent.
The teacher knows that the student has understood the moral of the story, that of the good and the evil in the world, there are many complications behind them which are hard to understand.
Which is why we should never only focus on the surface and judge others without understanding them first.
Those who like to pay the bill, do so not because they are loaded but because they value friendship above money.
Those who take the initiative at work, do so not because they are stupid but because they understand the concept of responsibility.
Those who apologize first after a fight, do so not because they are wrong but because they value the people around them.
Those who are willing to help you, do so not because they owe you anything but because they see you as a true friend.
Those who often text you, do so not because they have nothing better to do but because you are in their heart.
One day, all of us will get separated from each other; we will miss our conversations of everything and nothing; the dreams that we had. Days will pass by, months, years, until this contact becomes rare… One day our children will see our pictures and ask “Who are these people?” And we will smile with invisible tears because a heart is touched with a strong word and you will say: “It was them that I had the best days of my life with.”
Credits: http://www.newslinq.com/