Husband Knocks Out Big Bully for Verbally Harassing His Wife! 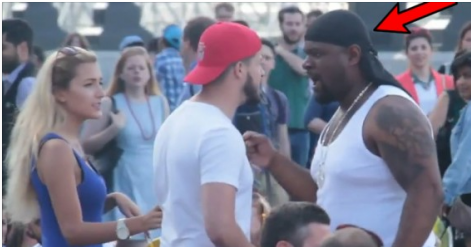 Don’t ever speak ill about another man’s wife, not even if you look bigger and stronger than him. You never know what you gonna get.
This big man at some outdoor dining place learned this the hard way when he allegedly dropped offending words to or about an attractive blonde, who happened to be with her husband. The offended husband confronted the man, who appeared to be quite proud of what he did. The wife tried to intervene and stop her husband from taking it further, saying the whole thing’s not worth it.


The husband was having none of it and when the defiant man refused to back down and instead emphasized that he was indeed talking about the wife, the husband grabbed a bottle and showed the bully what happens to men who talk sh*t about another man’s wife.

H/t: elitereaders
Posted by Unknown at 8:16 AM