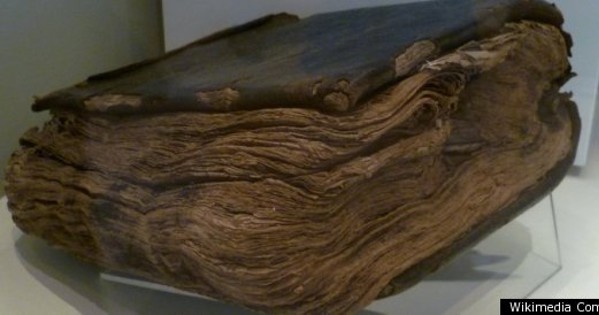 All I ever hear from religion is “There is proof” So here you are, ‘Proof’ A book, pre-dates already to 500AD. If this book is real then it changes religion. But like ANY bible it will be scrutinised and called wrong and blasphemous. I am saying, if the Bibles of today are real, then this is real. If this new book is fake, they are all fake. I dislike what religion does to this planet. So for me I know it will hurt friends and family, but to all religious people reading this, you can’t have your cake and eat it.
This is either real or fake. I can hear it already “MUSLIM LIES” If this book is real, millions of people have been living a blind lie. But if this book is wrong, well I don’t know how that can be. The Vatican have requested to see it. I will keep you updated. From my understanding carbon dating has been done a few times, and 1,500 years old.The book was moved by Turkish government to one of their museums by way of police escort. Barnabas was one of the disciples of Jesus Christ, and in the
Gospel of Barnabas, it states that Christ was never crucified. It reads instead that he rose to heaven while alive and Judas was the one crucified instead. Additionally, this ancient Bible declares that Jesus was not the Son of God, but only a prophet who spoke the word of God. The book also calls the Apostle Paul “The Impostor”. In a press release that was sent out by the Turkish government, it said that the Bible was snatched from a mob of smugglers in a Mediterranean region operation. The report explained that the group was accused of trafficking antique relics, performing illegal archaeological digs, and being in the possession of explosives. The book itself is believed to be valued as high as $28 million.

According to religious experts and specialists located in Tehram, they believe the Bible is an original. It is written in gold letters, against loosely bound blackened leather in Aramaic, which is the language that Jesus would have spoken. It is thought that during the Council of Nicea that the Catholic Church chose which Gospels that appear in the regular Bible as it is known today. They would have tossed out the Gospel of Barnabas along with many others in favor of the four Gospels of Matthew, Mark, Luke and John. There have been numerous supposed Biblical texts which have come to light over time, including the Dead Sea Gnostic Gospels. However this ancient Bible has especially seemed to brought worry to the Vatican.

What would something like this mean to any Christian based religions and their believers? It would cause a very tight spot. The Vatican has requested the Turkish authorities to let them look at the inside of the book within the Church. Now that the ancient Bible has been found and the contents released to the public, what will the Catholic church have to say about it? To believers of the Christian faith, this book will be considered a fraud and a fake, something to be ignored and forgotten about. To atheists, agnostics or people who are secular thinkers, they may wonder if the text is real or not. More than likely they will not even care. It is only spoken in the modern world in a tiny village located near Damascus. It has been reported to the media that mere photocopies of the ancient
Bible’s pages are being retailed for nearly $2 million. Along with that, the age, flawless construction, and the contents inside the ancient Bible are what make it so valuable. Repeating: a Bible which is reported to be at least 1500 years old was discovered in Turkey and inside it there is a Gospel of Barnabas. The book was moved by Turkish government to one of their museums by way of police escort. Barnabas was one of the disciples of Jesus Christ, and in the Gospel of Barnabas, it states that Christ was never crucified

source    www.secretsofthefed.com
Posted by Unknown at 5:33 AM