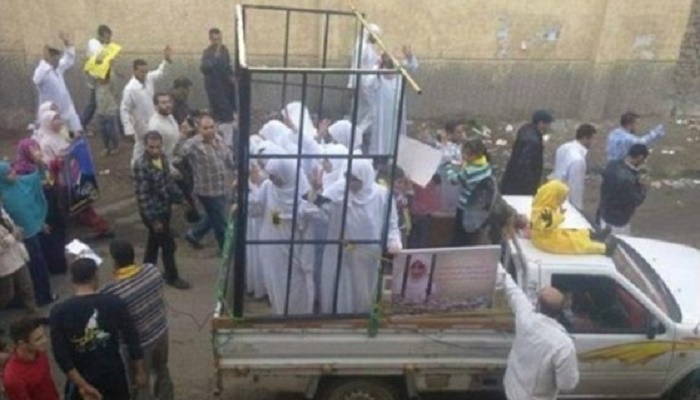 UN envoy reveals how sex slaves are ‘peddled like barrels of petrol’
The women refused to practice ‘sexual jihad’, a Kurdish official has claimed He also claimed money, distribution of women has created a rift within ISIS ISISpublished ‘price list’ of captured Yazidi, Christian sex slaves last year. UN envoy verified the document as genuine after spending time in region.
ISIS fanatics have executed 19 women for refusing to have sex with its fighters, a Kurdish official has said.
He claimed the women were being held hostage in Islamic State’s stronghold ofMosul, Iraq, which the terror group seized in June last year.
Meanwhile a UN envoy investigating Islamic State’s vile sex trade has said ‘girls get peddled like barrels of petrol’ and one can be bought by six different men.
She also verified a disturbing ISIS document which suggested the extremists sell the Yazidi and Christian women and children they have abducted, with girls aged just one to nine-years-old fetching the most money.
ISIS stormed the Sinjar district in northern Iraq last year and captured hundreds of women belonging to the Yazidi community, who the Islamists view as heretics.

The sex slaves who somehow escaped Islamic State’s clutches have told of how they were forced to marry fighters who physically and sexually abused them.
It is not known whether the 19 women executed – supposedly just a few days ago – were Yazidis or not.
They were put to death because they refused to ‘participate in the practice of sexual jihad,’ a spokesman for the Kurdish Democratic Party in Mosul told Iraqi News.
Said Mimousini also claimed issues around money and the distribution of women have caused a rift within ISIS’s ranks.
In October, the terror group released a pamphlet which showed how much it charged for the purchase of its female captives.
Its authenticity was debated until April, when the UN’s special envoy for sexual violence in conflict confirmed it was genuine during a trip to Iraq.
Zainab Bangura told Bloomberg: ‘The girls get peddled like barrels of petrol… One girl can be sold and bought by five or six different men.
‘Sometimes these fighters sell the girls back to their families for thousands of dollars of ransom.’ 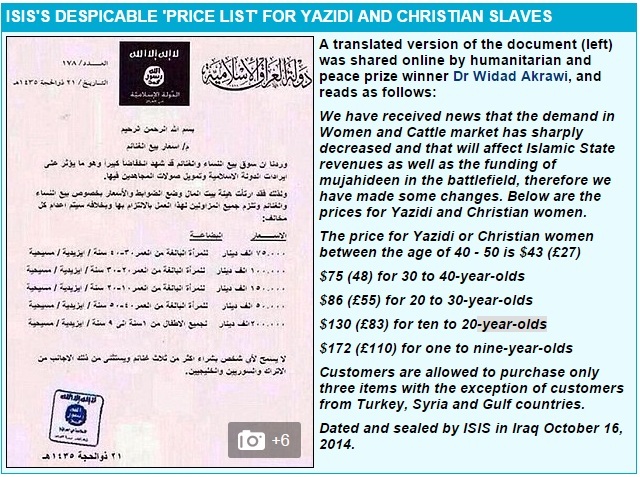 The shocking document described the women it abducted as ‘items’ and claimed a decrease in demand of ‘women and cattle’ affected ‘Islamic State revenues as well as the funding of mujahideen in the battlefield’.
It then gives the prices of women and children by age, with one to nine-year-olds costing the most – around £110. The older the women, the lower the price.
The young women – Bushra, 21, Munira, 17, and Noor, 22 – were tied up, gang raped and burnt with cigarettes after being forced to marry ISIS fighters. Their names have been changed to protect their identity.
After escaping Iraq, the women were flown to the UK by international charity AMAR, which helps people rebuild their lives following conflict.
Bushra, who tried to kill herself when she was sold to an ISIS extremist, said: ‘The man who had bought me took me to hospital.
‘He told me he was going to rape me that same day, however ill I made myself. He took me home, tied up my hands and feet, and raped me.
‘He raped me about five times a day. My sister was barely 14 when they raped her… I could hear her screaming but I couldn’t do anything as I was tied up.’
Thousands of women and girls from the Yazidi community – an ancient Kurdish ethnic group based in the north of Iraq – have had their lives shattered by ISISfighters, Amnesty International has said.
The organisation says hundreds, and possibly thousands, have been forced to marry, ‘sold’ or given as ‘gifts’ to Islamic State fighters or their supporters – and many held as sexual slaves are girls younger than 14.
Amnesty’s researcher Donatella Rovera spoke to more than 40 women who were fortunate enough to escape ISIS captivity in Iraq.
She discovered that some of these abused women and girls were so severely and irreparably traumatised that they have been driven to end their own lives.
Read more:www.iraqinews.comIslamicState Circulates Sex Slave Price List – Bloomberg BusinessDr. WidadAkrawi
Via Dailymail | Readsharecare
Posted by Unknown at 10:26 PM