BREAKING: What They Just Found in Calif. Shooter’s Bank Account Is Sending Obama Into Panic Mode 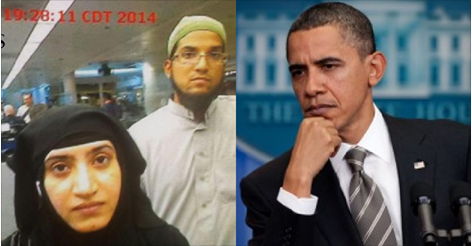 During President Barack Obama’s prime-time Sunday night address to the American people, he spoke about the ongoing investigation into the husband and wife team of radical jihadist shooters who slaughtered innocents in San Bernardino, California.
Obama made the claim that while the attacks certainly appeared to be terror-related, there was no evidence pointing to a “conspiracy” involving other people on either the domestic or international level.
However, that claim may have just been disproved by the revelation of an unusually large deposit into the shooter’s bank account two weeks before the attack, according to Fox News.
A source close to the investigation told Fox that $28,500 was deposited into Syed Farook’s bank account on Nov. 18, an unexpected and sizable windfall for a low-level government worker earning roughly $50,000 annually.
Investigators are still working to determine if the money came from a bank loan taken out by Farook, or if it came from a group or individual with nefarious ties.
Fox News reported that investigators had already wondered about the possibility of outside funding for the attack, given the amount that had obviously been spent on weapons and other gear.

Source @  conservativetribune.com
Posted by Unknown at 7:15 AM