Home » »Unlabelled » Did you know there is a DARK Bible? A mysterious book and it’s history. Peek inside.

Did you know there is a DARK Bible? A mysterious book and it’s history. Peek inside. 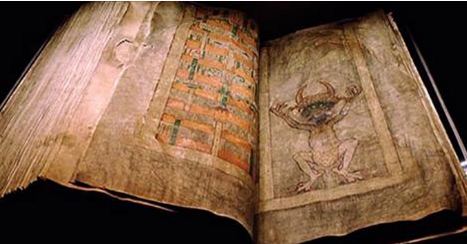 The stories of the Bible evolved slowly over centuries before the existence of orthodox religions. Many belief cults spread stories and myths probably handed down by oral tradition from generation to generation before people wrote them down. Many of the stories originally came from Egyptian and Sumerian cults. All of these early religions practiced polytheism, including the early Hebrews. Some of the oldest records of the stories that later entered the Old Testament came from thousands of small cylinder seals depicting creation stories, excavated from the Mesopotamia period. These early artifacts and artworks (dated as early as 2500 B.C.E.) established the basis for the Garden of Eden stories a least a thousand years before it impacted Hebrew mythology.
Virtually every human civilization in the Middle East, before and through Biblical times, practiced some form of female goddess worship. Archaeologists have confirmed that the earliest law, government, medicine, agriculture, architecture, metallurgy, wheeled vehicles, ceramics, textiles and written language had initially developed in societies that worshiped the Goddess. Later the goddesses became more war-like with the influence of the northern invaders who slowly replaced the goddesses with their mountain male war gods. So why doesn’t the Bible mention anything about the Goddess? In fact it does, but in disguise from converting the name of the goddesses to masculine terms. Many times “Gods” in the Bible refers to goddesses. Ashtoreth, or Asherah, named of masculine gender, for example, actually refers to Astarte- the Great Goddess. The Old Testament doesn’t even have a word for Goddess. The goddesses, sometimes, refers to the Hebrew word “Elohim” (masculine plural form) which later religionists mistranslated into the singular “God.” The Bible authors converted the ancient goddess symbols into icons of evil. As such, the snake, serpents, tree of knowledge, horns (of the bull), became associated with Satan. The end result gave women the status of inferiority, a result which we still see to this day.
The Old Testament consists of a body of literature spread over a period from approximately 1450 B.C.E. to 200 B.C.E. There exists no original writings of the Old Testament. There does exist, however, hundreds of fragments from copies that became the old testament. These fragments consist of Cuneiform tablets, papyrus paper, leather etchings and the famous Dead Sea Scrolls. The scribes of the old testament wrote in classical Hebrew except for some portions written in Aramaic. The traditional Hebrew scribes wrote the texts with consonants but the Rabbis later added vowels for verbal pronouncing. Of course the Rabbis did their best in choosing the vowels that they thought gave the words their proper meaning and pronouncement. In the second century C.E., or even earlier, the Rabbis compiled a text from manuscripts as had survived the destruction of Jerusalem in 70 C.E. and on this basis they established the traditional or Masoretic text, so called from the Hebrew word Massorah. This text incorporated the mistakes of generations of copyists, and in spite of the care bestowed on it, many errors of later copyists also found their way into it. The earliest surviving manuscripts of this text date from the ninth to eleventh centuries C.E. It comes mostly from these texts which religionists have used for the present Old Testament translations.
The New Testament has even fewer surviving texts. Scholars think that not until years after Jesus’ alleged death that its authors wrote the Gospels. There exists no evidence that the New Testament came from the purported original apostles or anyone else that had seen the alleged Jesus. Although the oldest surviving Christian texts came from Paul, he had never seen the earthly Jesus. There occurs nothing in Paul’s letters that either hints at the existence of the Gospels or even of a need for such memoirs of Jesus Christ. The oldest copy of the New Testament yet found consists of a tiny fragment from the Gospel of John. Scholars dated the little flake of papyrus from the period style of its handwriting to around the first half of the 2nd century C.E. The language of most of the new testament consists of old Greek.

Interestingly, there existed many competing Christian cults in the early years after Jesus’ alleged death. Some sects saw the universe in dualisms of goodness and sin, of light and darkness, God and the Devil. Other Christian sects performed odd rituals, some of which involved the swallowing of semen, thought of as a sacred substance. Many other Christians also wrote mystical stories and by the second century there existed more than a dozen Gospels, along with a whole library of other texts. These include letters of Jesus to foreign kings, letters of Paul to Aristotle, and histories of the disciples. In one of these secret Gospels, it describes Jesus taking naked young men off to secret initiation rites in the Garden of Gethsemene. There lived Christian Gnostics (knowers) who believed that the church itself derived from the Devil to keep man from God and from realizing his true nature. In those first centuries of Christianity orthodoxy did not exist and when an organized orthodox church finally came, it got defined, almost inadvertently, in argument against many of the Gnostic sects.
So the idea of the Bible as a single, sacred unalterable corpus of texts began in heresy and later extended and used by churchmen in their efforts to define orthodoxy. One of the Bible’s most influential editors, Irenaeus of Lyon, decided that there should only exist four Gospels like the four zones of the world, the four winds, the four divisions of man’s estate, and the four forms of the first living creatures – the lion of Mark, the calf of Luke, the man of Matthew, and the eagle of John. In a single stroke, Irenaeus had delineated the sacred book of the Christian church and left out the other Gospels. Irenaeus also wrote what Christianity did not include, and in this way Christianity became an orthodox faith. A work of Irenaeus, Against the Heresies, became the starting point for later inquisitions.
There has existed over a hundred different versions of the Bible, written in most of the languages of the time including Greek, Hebrew and Latin. Some versions left out certain biblical stories and others contained added stories. The completed versions of the old and new testament probably got finished at around 200-300 C.E. although many disputed the authenticity of some books which later ended up as Apocrypha (uncanonical or of questionable authorship). For example, the book of Ecclesiasticus appears in the Catholic Bible but not in Protestant versions.

The salvation doctrines of Christianity survived and flourished because they afforded the priesthood considerable power. The priests alone held the keys to salvation and could threaten the unbelievers with eternal punishment. Hence, in the evolution of Christianity in the last two thousand years with priests preying on human fears, the religion has demonstrated extraordinary powers of survival. Even without the priests, the various versions of the Bible have had more influence on the history of the world, in the minds of men than any other literature.
Unfortunately, the beliefs in Scripture produced the most violent actions against man in the history of humanity up to that time. The eliminationof competing Christian cults (called heretics) by early Christian churches acted as the seeds of violent atrocities against those who did not agree with Church dogma. There later followed the destruction of Rome by the Christian Goths, and the secret pagan sacrifices consented by the Pope, the Vandals that had the Bible with them as they destroyed imperial North Africa, the crusades in the eleventh century fighting in the lands around the eastern Mediterranean, Palestine and Syria, capturing Jerusalem and setting kingdoms from Anatolia to the Egyptian border. In 1204 the Fourth Crusade plundered Constantinople the most holy city at that time, with Christians fighting Christians. And the slaughters continued (and continues to this day). According to Romer, “More heretics and scholars were burned in the Middle Ages than were ever killed in Carolingian times. For at this time the Inquisition came into its own, and torture, largely unused as an instrument of government since Roman days, was reintroduced.”
In the 1380s, John Wycliffe translated the first English Bible which inspired an English religious revolution which caused persecutions against him by the Catholic Church.
In the early 1500’s the German heretic, Martin Luther, almost single handedly caused the final split from the Roman Catholic church and created the beginnings of the Protestant revolution. This split still influences violence to this day. He translated the Bible into German which further spread Protestantism. Luther also helped spread anti-Jewish sentiments with his preaching and books such as his “The Jews and their lies,” all supported through his interpretation of the Bible. One should not forget that Hitler (a Christian and great admirer of Luther) and his holocaust probably could not have occurred without his influence and the support of Bible believing German Christians.
In the 1530s William Tyndale completed his version of the English Protestant Bible (probably with the aid of Luther) and the first to print the English Bible. He too felt the persecution of the Church and he spent his last days in imprisonment and exile. His enemies finally caught him and burned him at the stake, but because of his celebrity, they strangled him first (what nice guys!).
After Luther’s German Bible, others followed suit by translating the Bible into their native languages including Dutch and French. Not until 1611 C.E. did a committee of translators and interpreters complete the most popular Bible of all time, the King James Version.
Today we still have dozens of Bible translation versions, with Bible scholars still arguing over the meaning and proper translations of words and phrases.
souirce      www.conspiracyclub.co
Posted by Unknown at 8:25 AM