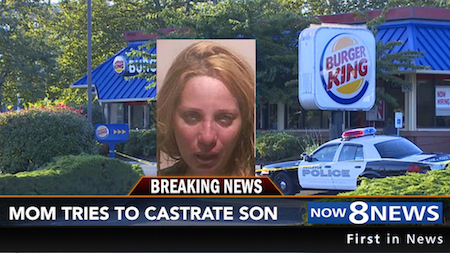 News 8 – A stand-off at an Atlanta, Georgia Burger King nearly ends in tragedy after a mother tries to castrate her son in an attempt to make him a woman before school starts. Laura Lambert, 25, was arrested on Wednesday and booked on charges of child abuse, child endangerment and assault. According to police reports, Lambert was seen scolding her son in the Burger King play area telling him “I told you not to wear that shirt! Pink, you were supposed to wear pink!”
Eyewitnesses say Lambert swatted her four-year-old son and told him, “If you don’t stop acting like a boy, I’m going to take you into the bathroom and whoop your *ss.” Then, she did just that. Kimberly Wilson, a patron at the restaurant, said she saw Lambert dragging her son into the restroom and immediately told the manager.
“She dragged him in there by his hair. The boy has beautiful, long hair,” Said Wilson. “Then, all we heard was screaming. ‘No mommy no!’ That’s all we could hear. The manager got the key to the restroom and there was blood, just blood.” Tommy Robertson, the manager of the Atlanta Burger King, said when he was able to access the restroom he tackled Lambert to the ground removing a 5 inch pocket knife from her hand. The customers at the restaurant said the scene was absolutely terrifying.
“This is something I will never be able to get out of my head,” Wilson said as she hugged her daughter who was with her that day. “I could never imagine harming my child. I hope they lock up that nasty b*tch for the rest of her life!”
The four-year-old boy suffered lacerations to his genital area which required 12 stitches, as well as bruising to the arms and face. He is being treated at the local hospital in stable condition. Authorities say he is being released to his father. As for the mother, she has remained silent since the incident and has refused to give a statement to police.
via-http://now8news.com/
Posted by Unknown at 8:38 AM