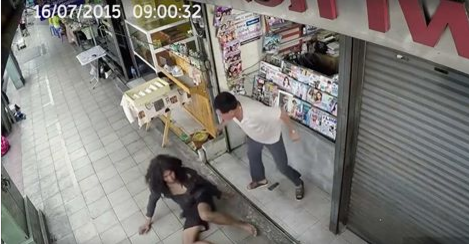 what we see in our everyday lives is just a tiny part of the truth.

A commercial for Vizer, a Thai security camera company, shows one man learning a lesson the hard way. The emotionally moving viral video, uploaded to YouTube on Aug. 27, has over 11 million views and has 6 million more views on Vizer’s Facebook page.

“Looking for him right? Well, he’s long gone,” the woman next door says to the storekeeper.
Looking up to see his security camera, the storekeeper heads to his computer to watch the footage. What he sees next has him in tears. The man in rags had been picking up garbage left on the sidewalk in front of the store and shooing away people vandalizing the store.
As the storekeeper watched the man protect his store he had flashbacks of the way he treated the man, screaming obscenities and kicking him.

In the surveillance footage, two men wearing motorcycle helmets appear to be breaking into the store. Walking into the scene, the man in rags confronts them and gets into a struggle, beaten and kicked multiple times by one of the men wearing a helmet. Eventually, one wounds the man badly, leaving the storekeeper in tears as he watches the footage.
A statement appears on the screen to end the commercial, “There’s much more truth that you are blind to..."