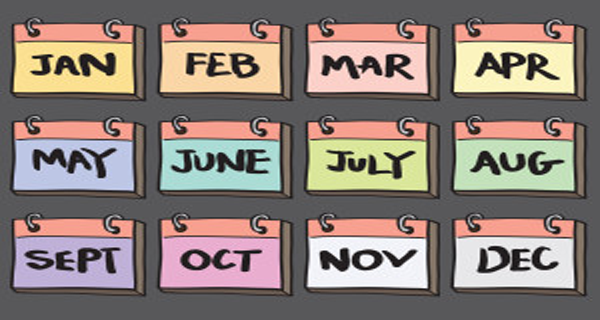 Find out what are your characteristics according to the month in which you are born…
January
January- ladies are serious and conservative, but also very ambitious. Many want to criticize. Rarely get very nervous and angry, but if that happens, be sure not to be in their presence. They do not want to show feelings, so do not expect openness from them. They let only people to approach them, who believe that, are on the same intellectual level as them and who share their views on life.
February
These women have an abstract way of thinking. Not everyone can understand them. With their often changing mood, means you need to treat them with patience. On the other side they are terribly romantic! For the beloved man they would do anything. It is important to give feedback to them to the same extent. People who will betray them will never see them again.
March
They are very cute until you upset them. In such upset mood they are able to rip everything apart. Otherwise they are dedicated and loyal. To live with this woman is a real pleasure. Only a real man will perceive it. Typical for them is their strong charisma and charm that can cast a spell as soon as look at them. But they are hard to fall in love. They don’t accept men’s tricks like with other women.
April
These women are diplomats. They easily communicate, but sometimes know to pity themselves. Therefore you should pay close attention. In most of them lies terrible great jealousy, which once if it burst, you better move away. But if you win the trust of the April girl, she will make you the happiest man on the planet. They don’t open their soul to anybody, only to those who they think they deserve.
May
Women born in May are very persistent and faithful to their principles and are very nice, in a physical way. However, combined with the difficult character, they become dangerous to any man who falls in love with them. These women, men will remember as long as they are alive.
June
They are quite curious girls, very creative and communicative, only sometimes they exaggerate in speaking and often hurt others. But they believe that this is right – better truth to be told in the face, rather than spoken from the back. It would not hurt them to learn to think first, before they speak. In love are very dangerous players. Men are like plasticine in their hands.
July
These girls are very mysterious and do not allow anybody to come close near them. Besides that they are very honest and you will rarely see them boast and brag, no matter that are very intelligent, beautiful and at a higher level than the rest. Do not want conflicts and are polite to everyone. They often suffer for the past times. Moreover if this July-woman falls in love in you, the greatest mistake will be if you cheat her because you will lose her forever.
August
A unique combination of great heart and egoism…! Do not mess with these ladies, because sooner or later she will win. Despite being happy with an incredible sense of humor, they do not allow anyone to mock them. If this happens, you won’t know what hit you. They always want to be in the spotlight and never suffer from men’s attention. Men lose their heads in their presence.
September
They are kind, disciplined, beautiful girls but never forgive the one who will betray them. So be careful not to hurt them because they’ll revenge you. September girls want long relationships. They are not girls for one night. On the other hand they are very critically tuned towards their partner and ask of him to meet all their requirements. The man who would prove, he will win. Their mind does let them to make a mistake, no matter their heart wants the opposite.
October
Women born in October have an iron character, demonstrate strength and independence. But on the other hand they are very emotional. Rarely cry in front of other people. They are ultra smart and know it’s not good to do open your soul to everyone, knowing that people tend to abuse it. These women can conquer the strongest characters. Other women often hate them because they envy them.
November
November lady is always one step ahead of everyone else. They know to read and immediately recognize a lie. You should not play with these women because you will get the worst end of it. An important thing to know about these women – if you are ready to hear the truth, you never ask them for their opinion.
December
Impatient, too fast, but born with a lot of luck. These girls always find a way to get out of any situation as winners. They’re a lot of fun. They know how to lift the mood. Usually, it takes only a few minutes to conquer you. Their heart is great, people sometimes hurt them, but because God is on their side at the end they get what they deserve.
H/t | www.healthylifevision.com