An old, homeless man in a wheelchair with a voice like this? Crazy! This busker was in for a big surprise when the man asked if he could sing with him on the street. The rest is history. 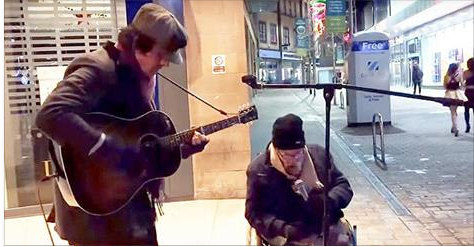 The story comes out of Leeds, UK where Johnny Walker decided to perform on the street on New Years Eve. Bernard Davey, a homeless man in a wheelchair who Johnny had seen around for some time, asked if he could hang out and sing a number or two. Johnny said yes, and the performance of “Summertime” began, with Davey’s voice just nailing the piece and pretty much everyone around was blown.

Here’s how Johnny describes the experience:
“My spontaneous street jam with Bernard Davey was a soul-affirming, enriching experience which summed up everything I love about street culture. The streets are full of wonderful surprises and stories. I hope Bernard’s amazing improvised version of ‘Summertime’ helps people to remember not to judge people they see on the streets according to their appearances, but to always look below the surface appearance and find the person underneath.”


Walker runs a non-profit which promotes street performances in public and focuses on compassion for homeless individuals. The campaign is called “Keep Streets Live!”