Home » »Unlabelled » Outrage As NYC Man Forces Wife To Walk Naked In Public After Catching Her Sending Nudes To Men.

Outrage As NYC Man Forces Wife To Walk Naked In Public After Catching Her Sending Nudes To Men. 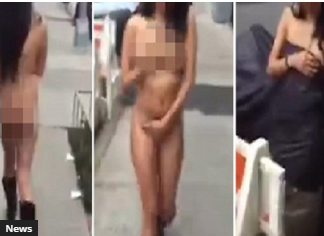 This woman was caught sexting and her husband made THIS her punishment? This is just foul.
Scroll down for video.
Via Daily Mail: This shocking clip appears to show the cruel moment a man humiliated his wife by making her walk naked down the road – after he caught her ‘sexting’ other men.
In the disturbing clip, the man trails the woman – who covers her modesty in nothing but a white towel – appears shaken but remarkably calm given her ordeal.
As he follows her, he shouts ‘she’s a tart’, ‘b****’ and ‘w****’ and berates her for messaging seven other men.


The clip has provoked anger on social media, while others have questioned whether the clip is genuine.
As the woman walks down the street, which the post claims is in New York, with the towel wrapped round her, he shouts in Spanish: ‘Take off your towel! Co-operate b****. Show what you are, so pretty and so great.
‘She’s a tart. Let’s go. Let’s go. Say hi to the camera and say why you’re doing this.’

This post was republished from michaelbaisden.com. You can find the original post here.
Posted by Unknown at 11:12 PM