Home » »Unlabelled » When She Gave Her Son THIS Toy She Had No Idea It Would Cause Him To Lose His Vision. WARNING…

When She Gave Her Son THIS Toy She Had No Idea It Would Cause Him To Lose His Vision. WARNING… 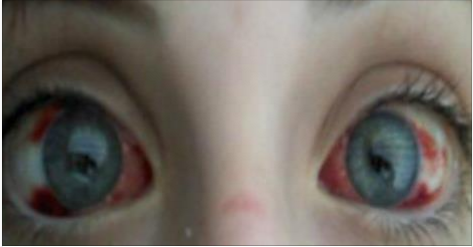 You’ve likely seen those little laser pointers which many kids play with. Well, there is serious damage that can occur with these things.

You may have heard warnings about not shining those things in your eyes, or in others eyes. There’s a good reason for that, and unfortunately one teenager permanently damaged his eyes because of this. He was 14 when he suddenly suffered from severe vision loss. The optometrist was shocked to find out why it had happened. Ben Armitage said the following about his patient:
“He came into see me and on the Friday night he’d got hold of a laser pen and unfortunately shined it in his eyes for a very brief period of time.”
It turns out 75% of his vision in each eye looks to be lost because of it. Listen to what the doctor says about the laser burning effect that these things have:
“The back of his eyes on both sides are showing laser burns, so he’s actually managed to burn the retina at the back of the eye near an area called the macular.”
Almost immediately the vision loss happened, but no pain was experienced. Armitage mentions that glasses or surgery can’t fix the lost vision. He explains further:
“Unfortunately that’s the area where your detailed central vision takes place and therefore it’s had somewhat of an exaggerated effect on how much sight he’s lost. The way the eye works is that the majority of your usable vision is central, including all for example your color vision, takes place in a very very small area.”
If you or your child have a laser pointer, make sure they understand how dangerous they indeed are. The best thing to do would be to get rid of these things and not even take the chance. Some of these are used as cat toys as well, as the cat enjoys chasing the laser beam. But it could prove to harm them as well.
Share this warning with all of your friends and family to spread awareness of the these dangerous “toys.”
Make sure to Like Us on facebook to see more awesome things like this.