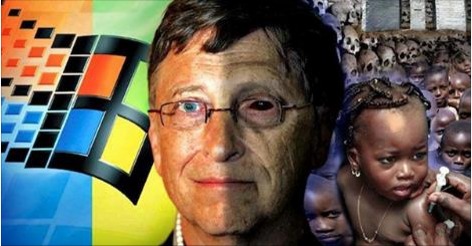 The Zika virus is a bio-weapon that is using GMO (genetically modified) mosquitoes to spread ‘future diseases’ according to a Kremlin report. And the finger of blame is being pointed squarely at Bill Gates.
It is understood the bio-weapon was developed by Bill Gates to achieve his self-confessed Illuminati goal of depopulating the world.
According to a leaked highly confidential Foreign Intelligence Service (SVR) report that has been read by sources in the Kremlin, it has been revealed that the Zika virus was ‘cooked up as a bio-weapon’ by ‘world governments and non-government organizations.’ It is understood the chief non-government organization behind the Zika virus is Bill Gates’ own Bill & Melinda Gates Foundation.
President Putin is said to be ‘angered.’ There have been meetings in the past 24 hours regarding banning Gates from the Russian Federation, as well as plans to protect humanity from the ‘world government created bio-weapon.’
‘GMOs are humanity’s mortal enemy and these sick b****** won’t be happy until most of us are dead.’
‘Western powers are in their final death throes, thrashing about and clutching at straws, using the last weapons in their arsenal of dirty tricks against humanity. We must not allow these GMO serial killers to poison our children.’
In 2010, the Bill & Melinda Gates Foundation funded Australian research scientists to release GMO mosquitoes infected with a bacterium.
That same year, Bill Gates confessed he wanted to depopulate the world – a key Illuminati goal.
“The world today has 6.8 billion people; that’s headed up to about 9 billion,” he said during the invitation-only 2010 TED Conference. “Now if we do a really great job on new vaccines, health care, reproductive health services, we lower that by perhaps 10 or 15 percent.”
Now those bacterium-infected GMO mosquitoes created by Bill Gates in 2010 are wreaking havoc in the Americas – with the whole globe at risk, according to the World Health Organization (WHO).
The WHO is now convening an Emergency Committee under International Health Regulations concerning the ‘explosive’ spread of the Zika virus throughout the Americas. The virus reportedly has the potential to reach pandemic proportions — possibly around the globe. But understanding why this outbreak happened is vital to stopping it.
The finger of blame is pointing squarely at the richest man in the world. What are they going to do about it?
source  www.conspiracyclub.co
Posted by Unknown at 5:50 PM