Despite all the public hoopla, all the cases of microcephaly being discovered in Brazil have never been scientifically linked to the Zika virus.
A group of doctors from South America are now saying the brain deformations the world is witnessing are caused by the mass fumigation of low-income Brazilian people with a chemical larvicide, not by mosquitoes carrying the Zika virus.
What we’re seeing with the brain deformations of children, in other words, is more like the history of thalidomide, a prescription medicine given to pregnant women that caused children to be born with limbs missing.
But the official narrative on all this is pushing a false link with Zika in order to justify more chemical fumigation, more vaccines and more genetically engineered mosquitoes. 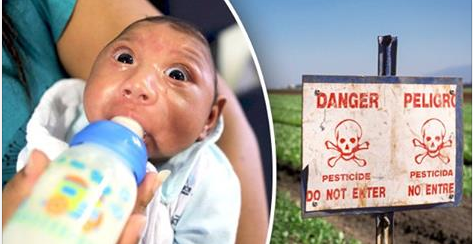 From the doctors at Red Universitaria de Ambiente y Salud (the Red University of Environment and Health), with h/t to GM Watch: (SOURCE document)
A dramatic increase of congenital malformations, especially microcephaly in newborns, was detected and quickly linked to the Zika virus by the Brazilian Ministry of Health.
However, they fail to recognise that in the area where most sick persons live, a chemical larvicide producing malformations in mosquitoes has been applied for 18 months, and that this poison (pyroproxyfen) is applied by the State on drinking water used by the affected population.
It looks like the world’s health authorities are using Zika virus mosquitoes as a cover story to conceal the damage caused by toxic chemicals manufactured by powerful globalist corporations.
The larvicide sprayed in Brazil, for example, is called “pyriproxyfen,” and it’s manufactured by Sumitomo Chemical, a corporation known to be a “strategic partner” of Monsanto. The Argentinian doctors’ report lists Sumitomo as a “subsidiary” of Monsanto.
As GM Watch reports:
“Pyriproxyfen is a growth inhibitor of mosquito larvae, which alters the development process from larva to pupa to adult, thus generating malformations in developing mosquitoes and killing or disabling them.”
Hmmm… a growth inhibitor of developing organisms? Does that raise any question marks with anyone when considering the under-developed cranial and neurological systems of the children being victimized in all this?
From the report:
“Malformations detected in thousands of children from pregnant women living in areas where the Brazilian state added pyriproxyfen to drinking water is not a coincidence, even though the Ministry of Health places a direct blame on Zika virus for this damage, while trying to ignore its responsibility and ruling out the hypothesis of direct and cumulative chemical damage caused by years of endocrine and immunological disruption of the affected population.
“Doctors from the Brazilian Association for Collective Health (ABRASCO) demand that urgent epidemiological studies taking into account this causal link be carried out, especially when among 3,893 cases of malformations confirmed until January 20, 2016, 49 children have died and only five of them were confirmed to have been infected with Zika.”
Zika virus doesn’t cause microcephaly!
As reported by the Argentinian doctors in their report, Zika virus has never been known to cause brain deformations in children:
Previous Zika epidemics did not cause birth defects in newborns, despite infecting 75% of the population in those countries. Also, in other countries such as Colombia there are no records of microcephaly; however, there are plenty of Zika cases.
The entire reason these brain deformations are being blamed on the Zika virus, we’re now learning, is so that powerful chemical companies can sell more toxic chemicals that poison the people and the environment even more! From the doctors’ report:
Brazilian doctors (Abrasco) are claiming that the strategy of chemical control is contaminating the environment as well as people, that it is not decreasing the amount of mosquitoes, and that this strategy is in fact a commercial manoeuvre from the chemical poisons industry, deeply integrated into Latin American ministries of health as well as WHO and PAHO.
It’s a vicious cycle, of course: The government sprays chemicals that cause brain deformations in children, but in order to avoid blaming the chemicals, they blame mosquitoes, thereby demanding MORE toxic chemicals be sprayed, causing yet more deformations that demand yet more chemicals and so on.
If all this sounds familiar, it’s because it’s ripped right out of the playbook of the vaccine industry: Many vaccines actually cause epidemics (which is why children who are stricken with measles and mumps have almost always been previously vaccinated against measles and mumps), thereby increasing public demand for more vaccines which cause more outbreaks, ad infinitum.
It’s the perfect business model: When your product causes an epidemic of disease or birth defects, just find something else to blame and then pay off all the government health authorities to demand more of your product!
After all, even the CDC loves these pandemics because it gives them an opportunity to exhibit more “authority” and push for more vaccines.
Billions already pledged to the vaccine industry… even with no scientific evidence of a link
Based entirely on fraudulent information and quack science, President Obama has nowcalled for $1.8 billion in government handouts to vaccine companies and pharmaceutical corporations to combat Zika.
Yet the linkage between Zika and microcephaly is nothing but an unproven, unscientific, mythological narrative dreamed up by the vaccine pushers. It carries the same scientific weight as saying “Black cats cause bad luck” or “Rubbing a rabbit’s foot gives me good luck.”
Hence the term “vaccine voodoo” which is a technically accurate description of the total lack of science underpinning the fraudulent vaccine industry.
Isn’t it amazing how quickly the government, the media and the vaccine pushers have leaped to their preferred conclusion about microcephaly even without a shred of scientific evidence to support such a notion?
(Hey, it’s a pandemic… they don’t need any real EVIDENCE, right?)
Genetically engineered mosquitoes aren’t working either
When bad science and dangerous chemicals are already destroying people’s lives, the solution must be MORE bad science, right?
Enter genetically engineered mosquitoes. According to all the criminally insane GMO pushers, GM mosquitoes are the instant answer to mosquito-borne diseases (and nothing can ever go wrong, we’re assured).
The problem is that they’re criminally insane and scientifically illiterate to boot. That’s why the GM mosquitoes aren’t working.

“THE LAST STRATEGY DEPLOYED IN BRAZIL, AND WHICH MIGHT BE REPLICATED IN ALL OUR COUNTRIES, IS THE USE OF GM MOSQUITOES — A TOTAL FAILURE, EXCEPT FOR THE COMPANY SUPPLYING MOSQUITOES,” SAY THE ARGENTINIAN DOCTORS.

The English company Oxitec sells male GM mosquitoes, supposedly in order to decrease the Aedes population. A lethal gene is inserted in those mosquitoes, which is transmitted to the offspring, causing death to larvae if it is not blocked by an antibiotic (tetracycline).
Currently in Brazil nearly 15 million GM mosquitoes have been released, and the failure is complete. Where field tests were carried out, less than 15% of larvae were transgenic, that is to say… wild females are not accepting the English mosquito from Oxitec. The response: increasing the release in poor areas.
Also, we must take into account that the biology of the disease shows that the female only “stings” when it’s pregnant and generating eggs after being fertilised by a male; it does it in that state and only then, because it needs blood components in order to develop the eggs.
So, if millions of male mosquitoes are released, there will be many more fertilised females looking to suck the blood of mammals, thus increasing the spreading of the disease from infected people to healthy people!
A massive science hoax, vaccine hoax and chemical hoax all designed to generate more industry profits while ignoring the true causes of suffering in Brazilian children
Once you put all the pieces of this puzzle together, it becomes crystal clear: The Zika virus narrative is a massive quack science hoax that’s being pushed solely to sell more chemicals, more GM mosquitoes, more vaccines and more fumigation of the Brazilian population with deadly substances.
The real cause of microcephaly is being systematically ignored, lending yet more support to the idea that this is all part of the population control agenda to poison the people of Brazil, deliberately reduce their offspring to mutants, increase abortions and demand that women no longer get pregnant.
All the signs are there, folks. This is the Bill Gates human depopulation agenda in full swing, disguised as a mosquito virus outbreak. It’s no mistake that the larvicide chemicals are being sprayed in the poorest areas of Brazil, targeting those very same populations that are now being told: