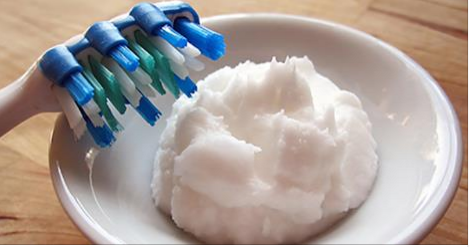 Coconut oil is rich in antibacterial, antifungal and anti-inflammatory properties.
A research was conducted to see how effective coconut oil’s biocidal properties are against the bacteria that causes tooth decay. The results showed that coconut oil is very potent indeed.
Coconut oil was tested on strains of Streptococcus bacteria which is found in one’s mouth.
The test involved the oil being infused with an enzyme and the test results showed that the coconut oil stopped the growth of a majority of strains of the Streptococcus bacteria and that also includes Streptococcus mutans which is a bacterium that produces acid and is responsible for tooth decay.
It is believed that the enzyme introduced into the oil breaks down the oil into fatty acids which destroy the bacteria.
Dr. Damien Brady who was the chief researcher of the study suggested that enzyme-modified coconut oil should be used more in oral care instead of the fluoride rich conventional ones. As it showed potent signs of effectively eliminating the bacteria that causes tooth decay as well as most of the harmful bacteria found in the mouth.
These are the 6 Reasons why Coconut Oil should be used as Toothpaste
1. Zero harmful chemicals
Most conventional toothpaste comprise of an antibacterial chemical known as triclosan.
This chemical has been found to be responsible for endocrine disruption and antibiotic resistance in some strain of harmful bacteria.
This endocrine-disrupting chemical has been known to be responsible for promoting a number of health conditions such as; preterm and  precocious puberty in girls, low birth weight babies, undescended testicles in boys, ovarian, prostate, breast and testicular cancer.
Another toxic chemical found in most toothpaste is fluoride. This is an industrial toxic waste product that is very poisonous to the body.
2. It stops cavity-causing bacteria
If you want to destroy plaque and Streptococcus mutans bacteria that causes cavity and tooth decay, just gently massage coconut oil to your gums for about 10 minutes daily and for a period if three weeks.
3. Coconut oil has no foaming agents
Foaming Agents in most toothpaste can greatly inhibit the function of your taste buds by disrupting the phospholipids found on the tongue.
Some of these foaming agents include surfactants such as -- sodium laureth sulfate (SLS), sodium laurel sulfate or sodium lauryl ether sulfate (SLES).
These foaming agents tend to boost the bitter taste on your tongue and are the reason why just after brushing whatever you eat tends to taste funny.
4. Coconut oil is readily affordable
A small amount of coconut oil is all you need daily for good oral hygiene. If you have a jar full of this oil it can last you for several months. So it is an affordable and inexpensive effective oral hygiene product.
5. Dogs can also use it
Coconut oil is equally effective for your pet dog.
You can brush its teeth with the oil or allow it to lock the oil, it would also be effective.
6. Easy to make at home
You can DIY at home with just some easy to obtain ingredients as well.
Making coconut oil at home
Xylitol has been known to fight cavities, but if you want to share this toothpaste with your dog please don’t use xylitol as it is harmful to your favourite pet.
Using coconut oil for oil pulling
You can use coconut oil for oil pulling; this is where you use the oil to rinse your mouth by do not gargle it.
You should carry out this oil pulling for about 10-15 minutes for maximum effect.
What happens is the coconut oil will help to “pull out” the bacteria that causes cavity as well as food debris from the mouth. As soon as you notice that the oil is somewhat milky white and thin, then you should sit it out.
By oil pulling with coconut oil you will significantly reduce the Streptococcus mutans bacteria responsible for tooth decay in your mouth. You will also get rid of plaque and you will improve the health of gums.
Your breath will also improve and those embarrassing mouth odours will cease.
Source: articles.mercola.com
Posted by Unknown at 1:48 AM