Home » »Unlabelled » Shock finding: More than 75 percent of all ‘honey’ sold in grocery stores contains no honey at all, by definition

Shock finding: More than 75 percent of all ‘honey’ sold in grocery stores contains no honey at all, by definition 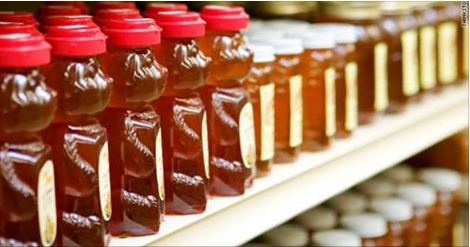 Almost 80% of the brands from major grocery stores and pharmacies tested by Food Safety News had no trace of pollen. Add 100% without pollen in those little packets of honey provided by airlines and restaurants

According to FSN, the lack of pollen in most conventional “honey” products is due to these products having been ultra-filtered. This means that they have been intensely heated, forced through extremely tiny filters, and potentially even watered down or adulterated in some way prior to hitting store shelves.
The US Food and Drug Administration (FDA) states that any honey products that have been ultra-filtered are not actually honey. But the agency is not doing anything to stop it.
Aaccording to the FDA’s definition.

In the U.S., the Food and Drug Administration says that any product that’s been ultra-filtered and no longer contains pollen isn’t honey. However, the FDA isn’t checking honey sold here to see if it contains pollen.

Ultra filtering is a high-tech procedure where honey is heated, sometimes watered down and then forced at high pressure through extremely small filters to remove pollen, which is the only foolproof sign identifying the source of the honey. It is a spin-off of a technique refined by the Chinese, who have illegally dumped tons of their honey — some containing illegal antibiotics — on the U.S. market for years.

After hearing about US grocery stores being flooded with unidentified honey, Food Safety News began an investigation. They purchased 60 different containers of honey from 10 different states, buying from a wide range of supermarkets. They then sent the honey samples to premier melissopalynologist and professor atTexas A&M University, Vaughn Bryant. What he found was that roughly three fourths of the honey contained no pollen, making it unidentifiable and unsafe. Of that average, he found that:100 percent of Winnie the Pooh sold in Walmart stores had all pollen removed.

• 100 percent of honey from individual packets from KFC and McDonald’s had all pollen removed.
• 77 percent of honey from big box stores like Costco, Sam’s Club, and Target had no traced of pollen.
• 100 percent of honey from drugstores like Walgreen’s and CVS Pharmacy had all the pollen filtered out.
• He did find out, however, that honey purchased from co-ops, farmers markets and stores like Trader Joes contained the full amount of original pollen.
Ultra-filtered honey is nothing more than a health-destroying processed sugar in the same vein as white table sugar or high fructose corn syrup.   When honey is pasteurized it is heated to such high temperatures that it kills a majority of the beneficial nutrients. Honey that is sparkling clear and free from wax and other debris has usually been processed with excessive heat, which may have destroyed many of honey’s good enzymes and vitamins. Processed honey is not honey at all.
On the other hand, one ounce of raw honey contains approximately 20 vitamins, 18 amino acids, 16 minerals, and a ton of antioxidants and phytonutrients. Raw honey is an antibacterial, antiviral, and antifungal substance. It is also highly nutritious. It contains significant amounts of B2, B3, B5, B6, C, magnesium, potassium, calcium, sodium chlorine, sulphur, and phosphate.
The easiest and the best way to protect the health of your family is to purchase local honey or Certified Organic honey. Some local producers process their own honey, and you know it is the real stuff.
YS Organic Bee Farms CERTIFIED ORGANIC RAW HONEY 100% CERTIFIED ORGANIC HONEY Raw, Unprocessed, Unpasteurized – Kosher 32oz