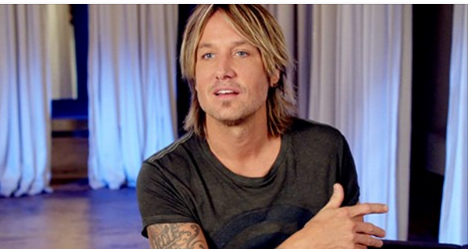 After watching the series finale of American Idol, millions of people are finally realizing who the real Keith Urban is.
Ten years of marriage and 2 kids later, Keith Urban is still finding a way to balance his life as a country superstar and family man.
Although most people know Keith Urban as the Australian country singer, he was actually born in New Zealand.
And that’s just the beginning of shocking details about the 48-year-old superstar…

When I learned who Keith Urban really is, I realized he’s so much more than being the best thing that ever happened to American Idol since Carrie Underwood.
These details qualify him as not only the best American Idol judge ever, but also as one of the most underrated country music artists of all time. In addition, he’s the kind of man every woman wants to marry – and every man should be looking up to.

Here’s 7 Reasons Why America Needs More Men Like Keith Urban:
#1: His story of salvation…
Keith has always been open about his dark struggles with addiction. After years of alcohol and drug abuse, Keith began to walk in the light of the Lord when he entered rehab in 2006 – only 4 months after getting married to Nicole Kidman.
“I had to make a decision which road I was going to take, once and for all. I’d been at that crossroads before and always taken the wrong road,” Keith explained.

“It was my diversion, my way of numbing myself to the rejection and the loneliness and the confusion,” he revealed.
#2: His devotion to marriage…
Keith is one of the few celebrities that uphold the sacredness of marriage. In interviews, Keith not only takes advantage of every opportunity he has to praise his wife, but he also emphasizes the hard work it takes to have a successful marriage. He once described the effort he and Nicole put toward making their marriage work during his challenging life chapter in rehab:
“Some of these things happen in marriages many, many years into it, and you work through them. It’s like moving into a house, and the house burns down; we get to build a new one together. Not one that’s mine; it’s ours, we built it together. We know every part of [our relationship] because we’ve built it. Just the two of us. It’s beautiful…. Nicole listened to her heart and did what she felt was the right thing to do. To see that kind of love in action, that’s very moving and deeply inspiring and just makes me want to be a better man,” Keith revealed.

“Dating. Keep dating your wife — that’s it. I’m still trying to get her to go out with me,” Keith suggests.
#3: His strong family values…
Tour life and fame could easily poison the precious family Keith has created with Nicole, but his desire to put family first is unlike anything I’ve ever seen among celebrities. He and Nicole take turns watching the kids whenever the other one is busy working, and they try to be on the road together as much as possible. The longest they’ve ever been apart is 5 days – which is unheard of in Hollywood! Whenever Nicole’s dad passed away in 2014, Keith took time off from American Idolto be there for her and the family.
“The loss of Nic’s dad was just a huge, huge – I can’t even describe what that moment was like for our family. I was very, very close to Nic’s dad,” he said.

“Being with my family is very important to me, and touring is very important to me, too, because it’s who I am. It’s what I do,” Keith explained.
#4: His passion for music…
If every man had an ounce of the passion Keith has for music, the world would be a much better place. Keith’s passion for music is a reflection of the passion that fuels his heart and pours onto every masterpiece he creates. Whether it’s his masterpiece of music, or whether it’s his masterpiece of family, Keith’s indescribable passion is so inspiring.
“I learned that music is a real gift and not just a trick. Because I’ve been playing since I was 6, there was a big part of me that thought it was a trick, like a person who can crack their knuckles or do some weird thing, like it’s what I did. I just got onstage and played, and everybody claps, so my identity was wrapped up in it and my self-esteem was built a large part on audience reaction. But what that time taught me was that I can not be thinking my life is all about playing music. I can’t have my self-esteem based solely on people clapping. It’s just so dangerous and unhealthy,” he explained.

“There are certain songs that are sacred. People want to hear them just as they are in their head; they don’t want you messing around with them. And then there are some other songs, if they’ve been around a long time in our set list, that I think we can take some creative liberties with,” Keith said.
#5: His outspoken faith in God…
Many of Keith’s songs have religious meanings behind them and some of them even have Bible verses in the title. Keith and Nicole also took a bold stand for their faith when they named their daughters Sunday, 7-years-old, and Faith, 5-years-old. One of the most heartwarming memories for Keith and Nicole was when they visited Monash Children’s Hospital to sing “Amazing Grace” to the young patients. However, Keith’s commitment to family and traditional values are the most vivid reflections of his strong faith in God.
“I’m lucky to have a rock of a husband with a strong faith. Choosing to protect his family and take care of himself and take care of his daughters and walk the walk… not just talk the talk,” Nicole said about Keith once.


“Someone said one time, ‘If your marriage isn’t your priority, you’re not married,’ and I thought, for me that’s so true. So as long as I keep her as a priority, everything else sort of seems to work. And when I don’t keep it as a priority, it’s … Jenga,” Keith explained.
#6: His conservative values…
Keith is one of the few celebrities who still believes in conservative values. You won’t catch him singing vulgar lyrics or making promiscuous music videos. Keith has also expressed how it’s a shame that American Idol is no longer on the air since it was one of the few family-friendly TV shows around.
“I don’t swear much. I’ve taken those words out of my vocabulary,” Keith revealed.

“Having two kids — 7 and 5 — I’m going to miss that kind of show,” Keith said about American Idol.
#7: His adoration of Nicole…
My heart melts every time I hear the latest praise Keith has said about his wife. These two give us hope that “the honeymoon phase” never fades – the destination just might be different and we have to make the most of every journey to that destination.
“I have a wife who is just from another planet. She is so celestial. I say that I was born into her. That is the best way I can describe how I feel about her and us,” Keith said about Nicole.

“I am more selfless and I am learning so much about myself from loving [Nicole]. I am more comfortable with who I am because at the core I’m happy. It’s a beautiful journey,” Keith said about his marriage.

Shortly after the series finale of American Idol, Keith gave us another reason why we need more men like him in this country! He is always so humble and thankful. Below is the video he posted on Instagram with a caption that said “Thank you @americanidol for 4 AMAZING years! I loved every second of it.” Keith is so genuine!


What an incredible human being. Share this article to show why America needs more men like Keith Urban!
Credits: qpolitical.com
Posted by Unknown at 7:11 PM