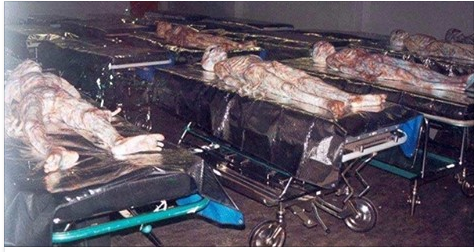 Most people ‘in the know’ realize that NASA is just part of the military industrial complex, but a recent open admission on mainstream news that “there are indications of alien life” is likely the beginning of a bid to get your undivided attention before full-forced disclosure ensues.
Most people already believe what NASA Chief Scientist Ellen Stofan states:
“I think we’re going to have strong indications of life beyond Earth within a decade . . .I think we’re going to have definitive evidence within 20-30 years.”
It isn’t going to take that long if we open our eyes.
Stofan goes on to say:
“We’re on the verge of things that people have wondered about for millennia. Within all of our lifetimes we’re going to understand that there is life on other bodies in the solar system. We’re going to understand the implications of that for life here on Earth.”
What we’re going to understand is that our ‘secret’ government has been hiding this fact for ages. In an effort to transition the US and other countries through its reach to a cabal-run oligarchy, ourshadow government has been lying about off-planet corporate slavery rings, alien abductions, benevolent beings who can only do so much until our collective consciousness elevates, and much, much more.
William Cooper, among others, tried to disclose the true purpose of NASA, but he was exterminated. His death, among thousands of others, will not be in vain.
We will learn that aside from extraterrestrial beings visiting our planet and many different ET races tinkering with our DNA over millenia, there are ancient humanoid races that are more than 10 million years old.
We will learn that a recent computer hacking retrieved millions of government and corporate personnel records, some say as part of documentation for Nuremburg-like trials, will begin soon against those who have mind-controlled, enslaved and tortured us. Undeniable photos of UFOs were also unearthed.
We will also learn that chemtrails and GMOs were the LEAST of plans made for us ‘sheeple’ and ‘useless eaters’ by a Luciferian cabal, and that President Harry Truman signed a document with certain ETs that allowed the ‘elite’ to conduct highly technological experiments with intelligence gained from these ETs in exchange for looking the other way when certain humans were abducted for ET experiments.
We will learn that we are not helpless, as we have been programmed to believe. We are, in fact, a rare humanoid race that has an incredible range of emotion and creative power. We will learn that our minds and emotions can either fuel chaos on this planet, or restore it to its rightful place of peace and cooperation, of care for others at least as much as ourselves.
We will learn that our ascension into infinitely peaceful beings is indeed possible, and it has beendescribed in countless books, many of which have been suppressed along with UFO information.
NASA is telling us now that the likelihood of alien life is a ruse. Be sure to remember those who have been executed to try to prove this information to us decades ago, and to use discernment when the truth is finally revealed.
Here’s the full disclosure by William Cooper:

Originally published on Waking Times
Posted by Unknown at 6:03 PM