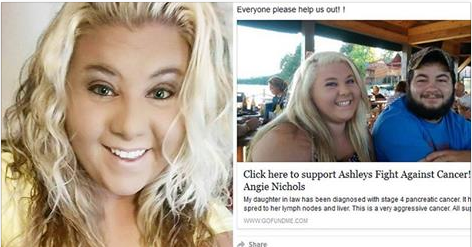 Scams have been around since long before sundials started getting brand names, and unfortunately it looks like it’ll be here for a while longer yet as well – but there’s lines you don’t cross.

This Sweetwater woman decided to cross it, and she’s now suffering the consequences.
Her name is Ashley Lively, and her mess all began when she made a Facebook post stating that she had developed pancreatic cancer and had only a couple weeks left to live. Her family was devastated and her small, local community banded together in support.

Month after the scam began she had amassed quite the following, but her lie just kept growing bigger and more elaborate.

After an investigation was FINALLY conducted people figured out she was lying the whole time, and the money was being used on beach trips and a brand new car. It’s disgusting people like this that we can’t have nice things for people that actually need it, and the news is shocking the entire nation.
Want to know what prompted the investigation in the first place? She posted vacation pictures from her trip down in Florida, all the while claiming to be very sick. Go figure, her own stupidity is what did her in!