This 9-year-old girl hits the pavement. Her parents barely recognize her 17 years later.

26-year-old Jasmin Britney from Finland is not your average young woman. Since her accident many years ago, she's been paralyzed from the neck down and confined to living in a wheelchair. It's not always easy for her, but Jasmin has found a unique hobby that helps her come to terms with her disability. 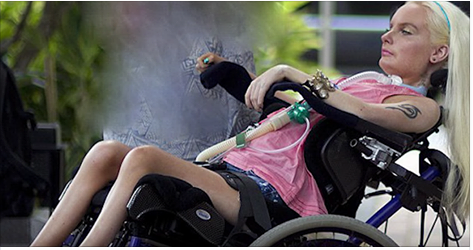 Jasmin spends at least 4 hours each day getting ready. She gets inspiration from her idols - Barbie, Britney Spears, Cinderella, Princess Jasmine, to name a few. These are the models she tries to match with her look. It is certainly an expensive and time-intensive procedure: She's estimated that she's spent nearly $15,000 over the last year on this 'hobby,' but for Jasmin, it is incredibly important. Facebook/ Jasmin Britney Katariina Koskiranta
"Bringing out my inner Barbie and fairy tale princess boosts my self-confidence," said Jasmin, who's loved the Spice Girls and Disney princesses since she was a young girl. Not much has changed in her taste since the accident that ended her childhood years before. Youtube/The Royal VideoMag
"It was a beautiful summer day and I'd just gotten my allowance," remembers Jasmin. On March 17th, 1998, the 9-year-old Katariina Koskiranta (her former name) was run over by a taxi and sent flying 23 meters through the air. The driver was distracted texting and hit the breaks too late. The little girl was immediately rushed to the hospital.

Youtube/Security Camera
When she woke up in the hospital, Jasmin couldn't feel her body. "I could see by the look in my parent's eyes that something wasn't right," said Jasmin. It was a miracle that Jasmin even survived, but she suffered a severe spinal break and there was no hope of repair. Her family tried their best to support her. Her siblings Janne and Satu, then 14 an 24, read many fairy tales to her while she was in the hospital. Facebook/ Jasmin Britney Katariina Koskiranta
As she was lying paralyzed in bed with a breathing tube, Jasmin made a decision: Instead of giving up on her life and dreams, she would turn into her childhood heroes and empower others dealing with difficulties of their own. Her good friend and caretaker Henriikka helps her every day with her makeup, clothes and care. Jasmin is so grateful to her friend for all her support. Facebook/ Jasmin Britney Katariina Koskiranta
But she didn't stop with just hair and makeup, she's officially changed her name to Jasmin Britney after her two favorite stars, Britney Spears and Princess Jasmin. "I never leave the house without the perfect Barbie look and high heels, even though I can't walk," said Jasmin. Her appearance has turned not only into an eccentric hobby, but also a symbol of hope for all those struggling with their own problems out there. Jasmin is now working on her degree and hopes to become a fashion designer. She raises awareness through herFacebook and Youtube channels and helps raise money for spinal injury care and treatments as well. Youtube/Taska
Even if some of Jasmin's looks aren't really your style, you have to give her credit for her confidence and determination. A lot of people aren't able to overcome such extreme injuries. Jasmin's transformation is a reminder to us all that we can never give up on our dreams.

source  ww.hefty.co
Posted by Unknown at 9:16 AM