Police Form Human Chain To Save Puppy Trapped In Canal 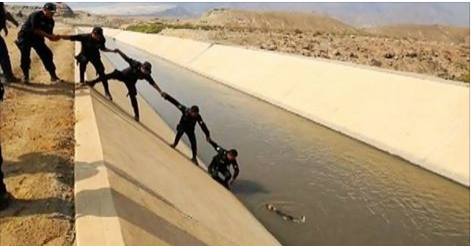 Sometimes, one kind, caring heart just isn't enough to rescue an animal in distress. Fortunately, in this case, there were plenty of them to go around.
On Wednesday, officers form Peru's National Police joined together to save a puppy who was on the verge of drowning. The desperate animal had fallen into an irrigation canal near the city of Trujillo, but because the concrete banks were so steep, she wasn't able to get out on her own.
The quick-thinking officers, however, were able to devise a way of getting her to safety — forming a human chain to get nearer to the water. Still, it took several attempts as the young dog floated past beyond reach, but she was ultimately rescued when one officer leapt in after her.

Interestingly, this isn't the only occasion in recent days where folks have joined together in a human chain to save a stranded pup.
Last week, a group of young people in Kazakhstan employed the same sort of teamwork to retrieve a dog from a similar predicament. That, along with this more recent rescue, is an encouraging sign that acts of kindness to animals really are catching on.