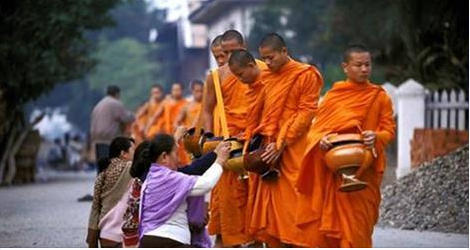 I offer alms-food and other eatables to the compassionate Buddha & His disciples who are endowed with the infinite accumulation of glory, merit and wisdom. Owing to my deed of this merit, may I realize Nibbana as soon as possible.
The Benefits of Offering Alms-food
If one does not have cooked-rice to eat, he cannot live long. He will become ugly, sad, weak and stupid for lack of nutrition.
Taking alms-food (cooked-rice) can make one live long. Moreover, he will be endowed with beauty, happiness, strength and wisdom.
A Story Showing The Benefits of Offering Alms-food
Ninety-four world cycles ago, there appeared Siddhattha Buddha. One day, a man saw the Buddha on his alms round and noticed the fair complexion of the Buddha emanating yellow hues. On seeing thus the man admired the Buddha and paid homage to him. He also invited the Buddha to his house and offered alms-food.
Because of his donation, that man was repeatedly reborn in celestial realms and humanexistences.He could continually enjoy both celestial and worldly pleasures. He was never reborn in woeful abodes. In Gotama Buddha’s time (Our current Buddha’s time), he became a man of great wealth. When he came of age, he was ordained as a bhikkhu. Then he became an arahat.
Posted by Unknown at 6:00 AM