Home » »Unlabelled » Shortly after birth, the baby elephant is handled with blades. Years later, they drive the animal through the ring.

Shortly after birth, the baby elephant is handled with blades. Years later, they drive the animal through the ring. 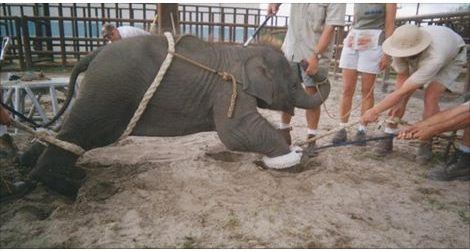 Routine everyday work at the Center for Elephant Conservation in Florida, USA: An elephant calf is tied to the ground and is surrounded by guards who mistreat it with ropes and sticks. It is inconceivable that these shocking scenes are taking place under the guise of "elephant protection". The fact of the matter is that behind this cruel procedure lies a traditional entertainment industry. Sam Haddock/Peta
The operator of the center is the American Ringling Brother Circus who uses this facility for breeding and dressage of his circus elephants. In the photos, you can see how the animals are separated immediately after birth from their mothers and trained for the circus shows. Sam Haddock/Peta
As part of the training a cruel instrument is used, which is known as the goad or ankus. At the head of this “animal tamer rod”, there are two blades, which are drilled directly into the elephant’s sensitive skin. The images are sad proof of the mental and physical torture inflicted on the elephants with this instrument. It comes as no surprise that this rod has been banned in several US states. Sam Haddock/Peta
You can tell how painful dressage really is by the number of elephants who do not survive the procedure. The 8-month-old calf, Ricardo, had to be put down after it fell from a platform during training and broke its two legs. A few years earlier, a 3-year-old elephant drowned after it had fled to closeby water out of fear of his tamer's dreaded rod. Sam Haddock/Peta
It is because of these incidents being common knowledge and these images being published by former circus tamer, Sam Haddock, that the company, Ringling, has now terminated his elephant program. The retired elephants are supposedly just sent back to their place of martyrdom: the Center for Elephant Conservation in Florida. Whether or not they continue to be trained there is unclear. According to the company, the animals are also supposedly used for cancer research. Nevertheless, elephants all around the world still continue to be trained in this cruel way. In Thailand, they typically refer to the dressage process as elephant crushing. This is because the will of the young animals is broken through beatings, sleep deprivation and starvation. Sam Haddock/Peta
As long as such terrible scenes continue to take place, in which animals are presented for entertainment purposes, all such programs should be boycotted. There are many animal welfare organizations and wildlife parks that fight for the liberation of tortured circus elephants, and it is worthwhile supporting them. For example, Save Elephant Foundation or the Elephant Nature Park.
The above shown images, as shocking as they are, may just be a first step towards improvement. Share this article in order to show everyone what really happens behind the colorful scenes of the circus.
Posted by Unknown at 6:38 PM